This was a fun field trip to Agape Center for Environmental Education.  It was quite a drive but worth the trip!

We were split into 3 groups by age and each had different activities.

The middle group had lessons on survival skills.  This is a shot of them as they were leaving the meeting area. 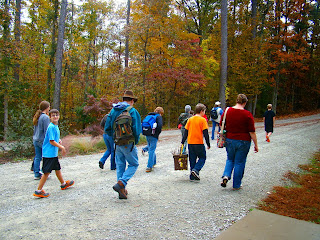 The youngest groups had several shorter programs.  We started out learning about birds. 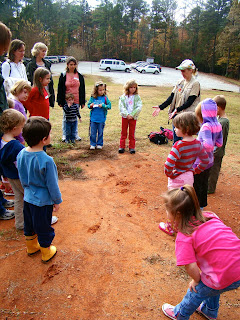 They did an exercise in looking for colored toothpicks in a small roped off square.  After a short time, they stopped and then counted to see which colors that they had found the most of.  What a neat way to learn about camouflage! They tried it another time and found still more with similar results.  The green and brown ones were the hardest to spot and the same would be true of insects that are prey for the birds. 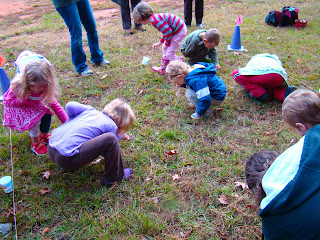 In the next activity we headed for the woods.  The children were split into 2 teams and were told to make a home.  They put on gloves and got to work.  I'm not sure that there was much planning in what they were doing - they were supposed to select the type of animal first and then build a home for it.  I think most of them just liked moving the "logs" around. 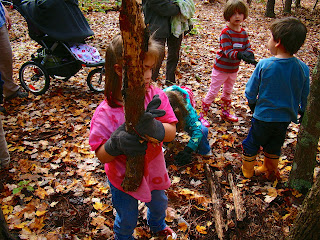 Lots of little ones in this "shelter". 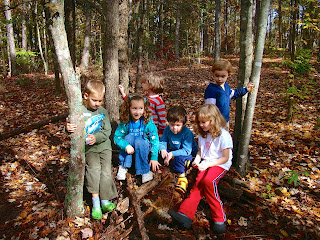 For our last activity, we headed to a new spot.  It was a gorgeous day and the walk was a nice one. 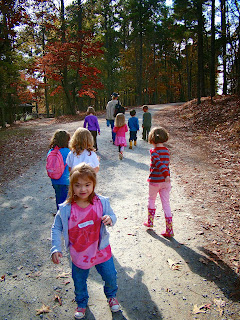 We learned about Native Americans and saw pictures of a wide variety of people from many different places.  We learned about how they lived, skills that they developed through their work and play as well as some of the music that they enjoyed. 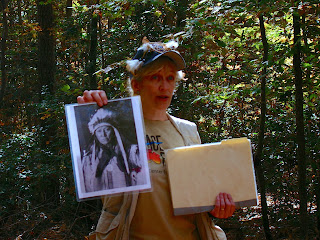 In order to hunt, they had to learn to creep and move quietly through the woods.  Since it had rained, the leaves were wet and easier to walk on without making a lot of sound.  One person was blindfolded in this game. 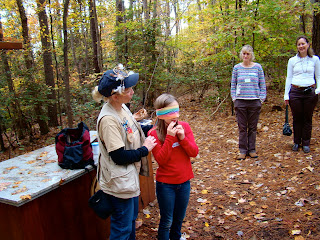 The rest were spread out a short distance away. 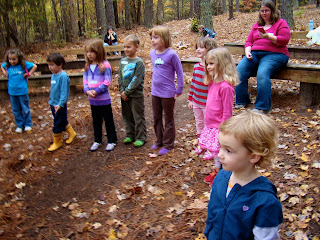 When the leader pointed at them, they crept up to the blindfolded child trying not to make a noise.  If the child that was blindfolded heard them, she would point to the one making the noise and they had to start over.  They really enjoyed this game! 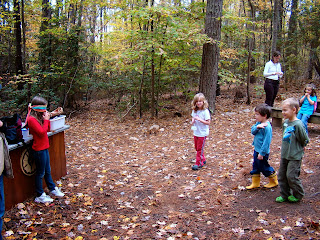 We played some games that tested hand-eye coordination.  Can you see the circle on the right?  The child was aiming a dart at this. 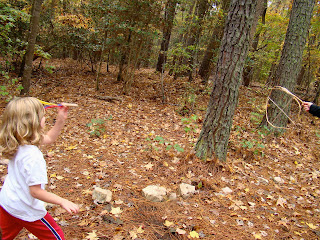 I don't remember the name of this one.  IT was a small sack with a feather sticking from it.  The idea was to bounce it up over and over using your hands. 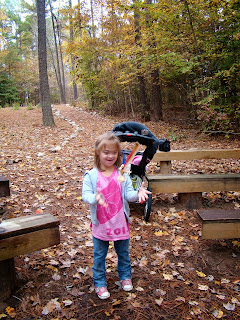 Can you see how high she has tossed it in this one? 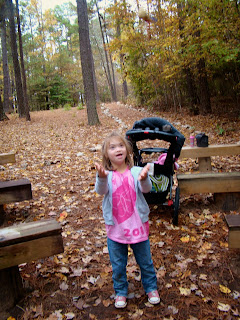 They also learned about some instruments such as a shaker made from a gourd.  We sang a song and danced in a circle.  They really enjoyed all of these activities. 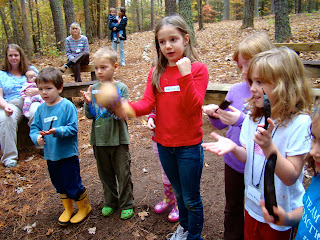 This is a buzzer which is like a button on a piece of string.  The button is wound tightly, then you pull on the string and it unwinds and rewinds making a buzzing sound. 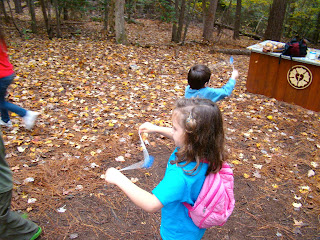 We then walked back to a shelter to have a picnic and meet our group.  The oldest group of students went on a 3 hour swamp trek.  They looked at ecosystems and collected data on soil texture, temperature, sunlight, signs of animal life, types of plants, weather factors and more. 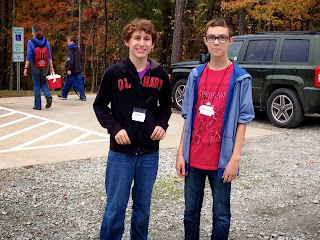 The leader of this group said that if she had groups like this every day that she would pay to come to work.  :-)  Made me very happy to hear this!  They really are a great group of teens!  (They are just playing in the photo below and not doing anything related to the program.) 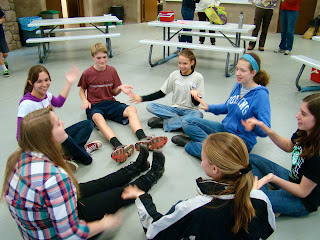 All in all, this was a fun field trip.  It was great to be outside exploring and learning!  Thankful to have so many great resources near us.  I highly recommend this outing to anyone in the area!

Blessings
Leslie
Posted by Leslie at 2:46 AM No comments: