St Louis is our next stop

Wondering if I'm posting too many pictures?  It isn't remotely close to all that I've taken, but still.

We left Mammoth Cave about lunch time and started driving.  We stopped for lunch at a fast food place and then drove some more.  I chose a book that had a little bit of information on the Arch to do as a read aloud while we drove.  Just thought it would make things more fun.  It's part of a neat series of books on real  places written by Carole Marsh.  It is entitled The Mystery on the Mighty Mississippi.  I also bought the teacher's guide to go along with it, but found it wasn't really needed for what we were doing on the trip.  (Warning that this book does briefly mention vampires, but it was not central to the theme at all.  I skipped over most of it.)

Roger had found out ahead of time of a neat place to stop before we got into St Louis in order to view the Arch.  It was perfect!  It was billed as the Best Place to view the Gateway Arch and I would concur. 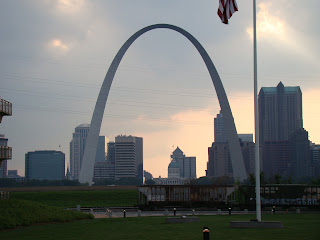 One of the neat things about this spot is that it had clean bathrooms and lots of wide open green space.  Perfect for our picnic supper and for playing frisbee.  It was also a great spot for a family photo.  Thankfully there were some other people there who kindly took the picture for us. 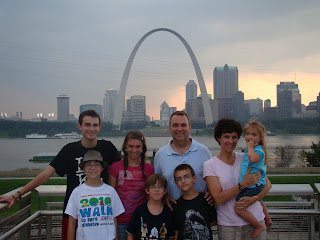 After eating, we drove over the the Arch.  Did you know it stays open really late?  It wasn't very crowded at that time either. 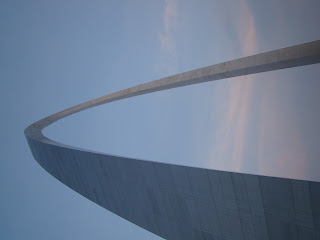 Most of us were ready to go up in the Arch.  Well, all but one.  Daniel was insistent that he did not want to go up.  I decided to stay down with him.  We started working on the Jr Ranger badge while the others went up.  You go up in a "tram" which is really a small round car with 5 seats. 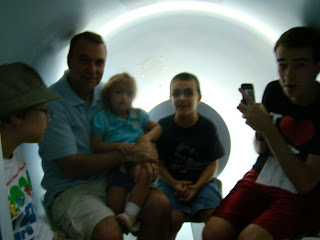 At the top of the Arch. 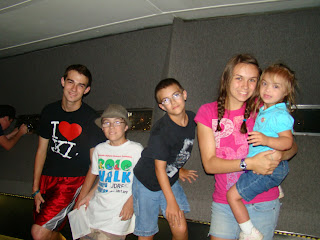 Neat views at night!  They could see a baseball game in action. 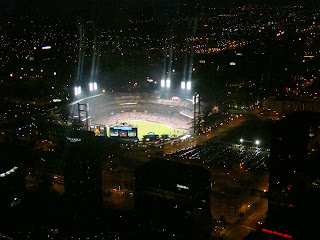 A model of the tram so that you could test it out. 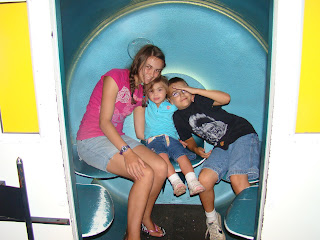 A really neat picture of the Arch, the designer, the workers and to scale sizes of other man-made US landmarks.  The Arch is the tallest of them all. 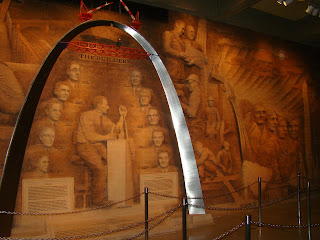 Since we arrived late, our stay was not long.  We headed to our hotel.  We stayed in a Hampton Inn Suites which I highly recommend.  Lots of room and a nice breakfast (free) in the morning!  We headed back to the Arch in the morning to finish up the Jr Ranger badges.  I also told Daniel that he was going to go to the top.  The others had said that it wasn't scary and I thought he would appreciate the experience.

This is a model in the room where we waited our turn to ride. 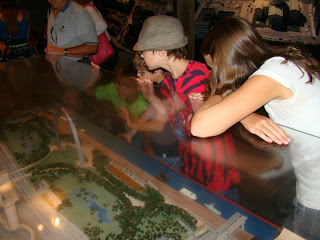 Ready to go up!  We got our tickets early which was a good thing!  By the time we got down, the line was long to get tickets to go up. 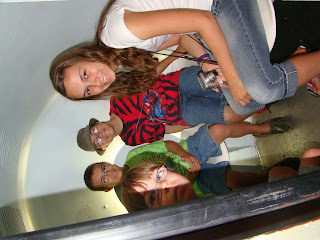 This is a view of the park where we were the night before.  To the right of the flag is a tall observation tower where we stood for our family photo. 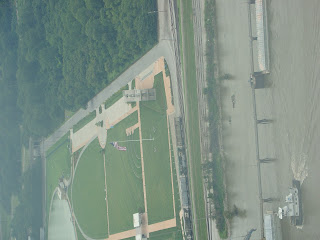 Just in case you wondered how tall it really is. 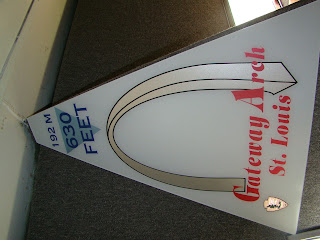 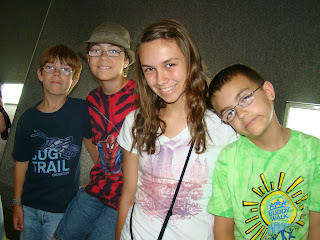 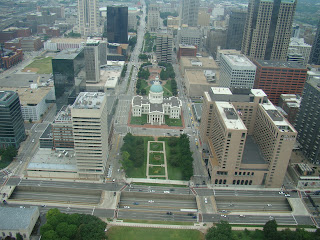 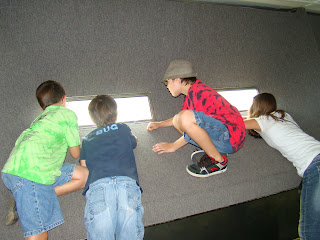 We enjoyed the Museum of Westward Expansion which is all underground - under the Arch.  It is the size of a football field with many interesting exhibits.  I especially enjoyed learning about the peace medals that were given by Kings and Presidents.  My younger boys earned their Jr Ranger badges.  Joshua did too, but isn't in the photo. 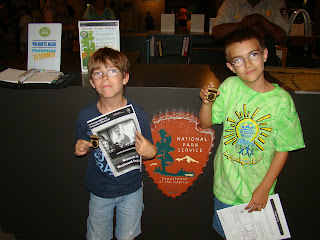 We headed out before lunch time and by this time there was a long line inside and outside of the Arch.  My recommendation is to go early or go at night.  We stopped for lunch and then headed toward Omaha.  We found out as we were driving that the roads we had planned to take were flooded.  Thankfully, Roger's sister warned us of this and we made a detour.  It ended up being a long drive that day - but shorter than it would have been had we not known about the flooding.

We arrived late at his sister's house.  Happy to see family and looking forward to a fun couple of days with them.

Blessings
Leslie
Posted by Leslie at 11:58 PM 2 comments: Links to this post