Field trip to the Art Museum

Our first field trip of the new year was to the NC Art Musuem.  It brought back memories for me.  It's been just over 4 years since I had last been here.  It was the last place that I went before Eliana was born.  When times were hard at first, I thought of this as my "last day of normal" - before my world was turned upside down.

I wish I had known then what I know now and perhaps it wouldn't have been so hard.  Of course, the reason it wouldn't be so hard now is that I've walked that path.  I've found God faithful.  I've been tested and know where my strength comes from.  God is good.  I don't always understand, but I know He is good.  (This is not to say that I won't still struggle and go through hard times!)

Back to the museum.  We were split into several groups.  My oldest 3 toured the Normal Rockwell exhibit!  I heard it was great and would have loved to go in myself.  Maybe another year.

The younger half of the group were split into 2 different groups.  I took my two youngest in one of the groups.  The museum has been renovated and has a new addition since we were last there.  It's really big and nice and easy to get around in.

We were told not to bring strollers, but shortly after going in one of the security guards asked if I needed one.  I declined thinking we weren't supposed to have them.  When the second guard asked a little bit later, I gratefully said yes.  I think it was a much easier trip with a stroller! 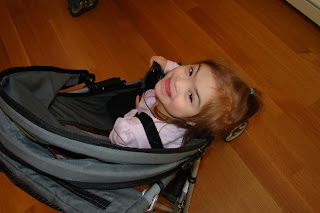 We all had a guided tour and our docent was very good about asking questions and involving the children.  We toured exhibits from Africa. 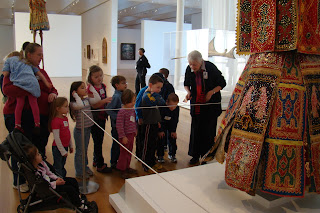 This is a picture of heads of people in Africa.  They added two heads when they visited Raleigh to donate this piece.  Can you find them? 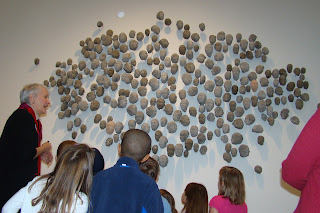 This pictures is made from many spools of thread!  It's one of my favorites.  Can you tell what it is? 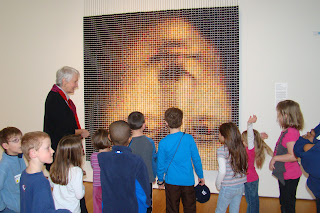 Are you wondering why it is upside down?  Well, I'm not sure why it was done that way, but there is a neat little device that you can look through that shows it right-side up! 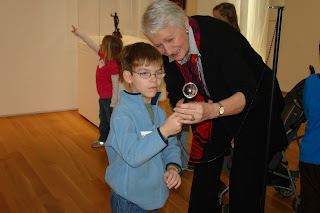 We crossed paths once with one of our groups.  It is hard sometimes to be split up as I always want to know what everyone is doing and learning.  It some settings though it really does work best to tailor what we are doing based on ages.  I'm thankful to have options! 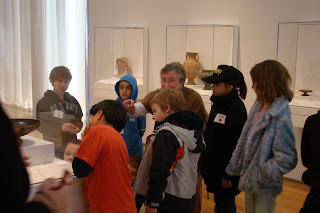 We saw exhibits from Egypt. 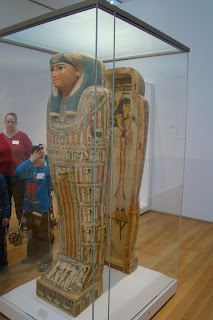 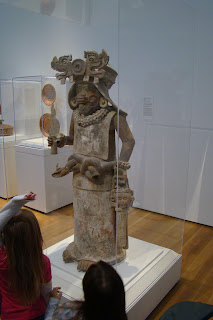 We examined pictures from various time periods.  This was a portrait done of a wealthy man and his family.  Sadly, it wasn't a truly accurate painting.  He was a loyalist and lost much of his wealth after the war.  His wife died.  This was a painting of how things might have been. 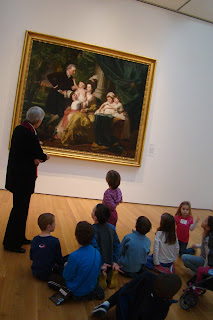 We took Flat Stanley with us.  (I know we need to send him back!!!) 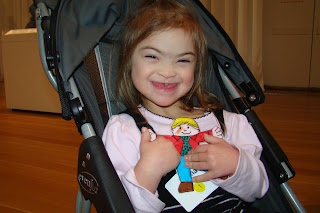 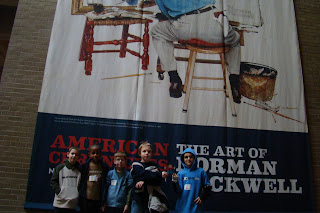 This is a neat sculpture of hands.  The children tried to put their hands in the same pose and found that they couldn't do it.  Can you?  Of course, you can't either because it is of two right hands.  They then tried it with a partner and were able to do it. 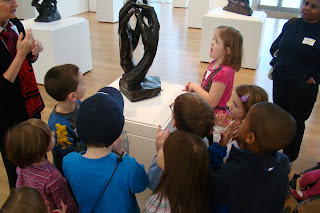 We had some free time while we were waiting for some of the groups to finish.  I love watching my oldest and youngest together.  Sometimes they just tickle me. 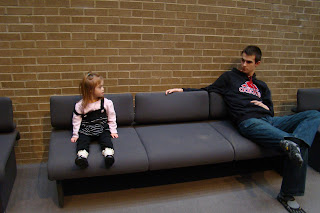 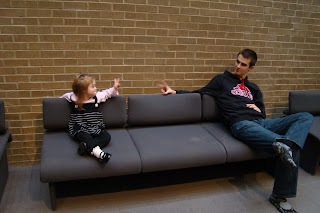 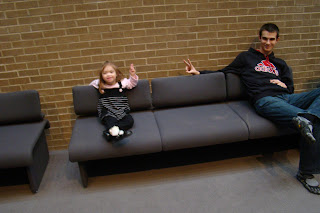 We visited a travelling Eric Carle museum exhibit too while we were there.  It was just a few works by Carle and some by other children's picture book artists. 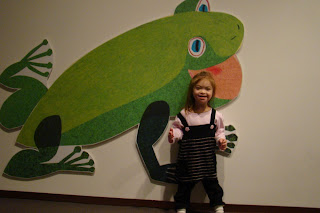 This was a delightful way to start our school year with our FIAR group.  I will confess that I'm not one that greatly enjoys art, but did enjoy learning in this way.  I'm glad my children have the opportunity to learn too as it's not something that I cover a lot in our schooling.

We treated ourselves to lunch out afterwards with lots of our friends.  I am thankful for a fun group with this to learn and have fun.  Hope you are having a fun week!