I know I post a lot about field trips.  I do love them!  Hands-on learning where you can see and touch and experience just seem like the best way to learn.  I know experiencing something is so much better for me to learn something!  I know it has been great for my children too!

We finished up rowing the Beyond book, Cricket in Times Square, and then set off on a field trip.  It started with me hinting about it to some friends in the co-op.  One then told me later that if I was serious, that she was in.  Soon, it grew and 5 families were in!

I bet you are already guessing our destination, right?  I wondered if it was crazy.  Not sure how it would be to take my younger ones, but knew that this would be a great experience!  We decided to go for it.  I would not have done it on my own, but with friends going, it seemed manageable.  Then Roger decided to join us too which made it even easier.  Well, maybe easy isn't the right word.  Doable.

We have studied so much about this site this year.  Really delving into the history, sites and locations.  This was a natural way to end the book in so many ways.  (Not that we have done this in the past, but the timing was good.)  I'm so glad we did this!!!

So have you guessed?  Or maybe you have seen the pictures already?

I've been wanting to post more about this, but since I was late in my posts, by the time I got close to being ready to post, disaster had hit and it just didn't seem right to post anything then.  We were so thankful to be able to visit and our hearts were so touched by all that went on there since we had just been there too.

We headed out to see Times Square.  To look at the subway station where the story takes place.  To explore the city.

We drove to NYC on a Friday morning.  When we arrived at our hotel and got settled, we were ready to do some exploring.  We stayed in NJ and there was a bus stop right in front of our hotel.  Very convenient!

We hopped on the bus and headed in. 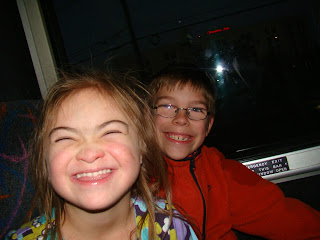 It took a long time to get in due to rush hour traffic. 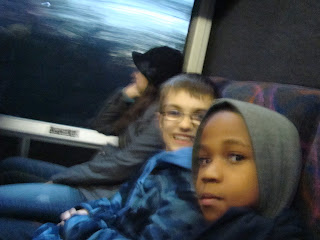 Arriving at the bus station and then working to find out way out into the city.  Thankfully we had a few people in the group that had been here before and knew their way around. 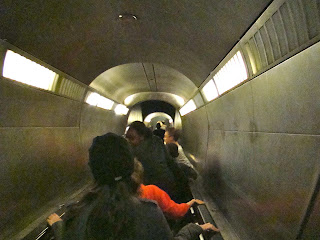 Excited and ready to see Times Square at night! 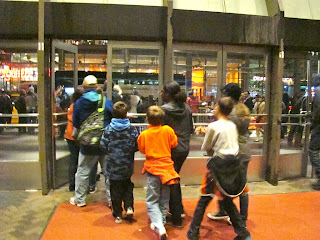 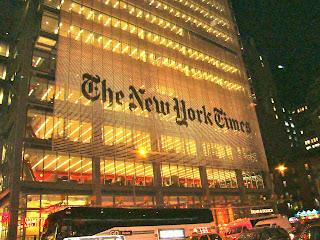 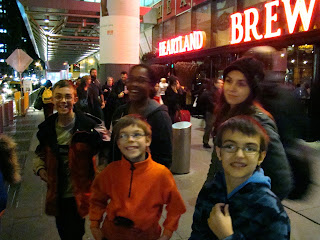 Some we even recognized. 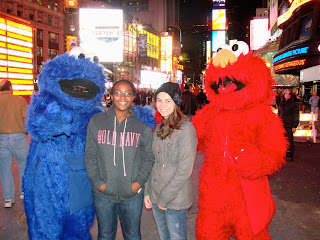 So much to see and yet also hold tightly to little hands. 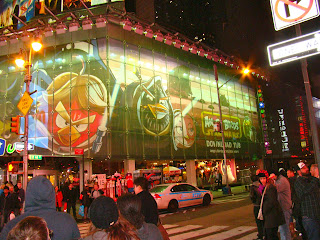 We made it to Times Square - to the big red bleachers and met more of our friends there! 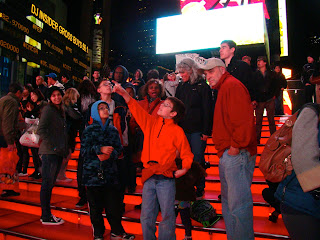 We saw ourselves on the Jumbotron.  Can you see me there?  I'm in the center near the bottom - with a camera in front of my face.  LOL 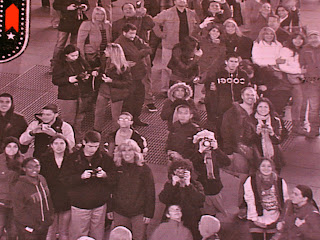 We decided just to spend the evening walking around.  It was so much fun to be there with friends. 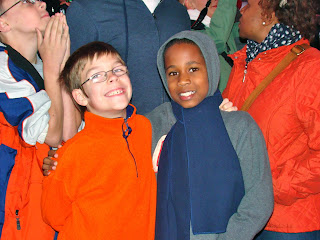 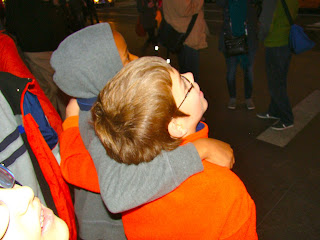 And I still love pictures from the back.  Aren't they cute?! 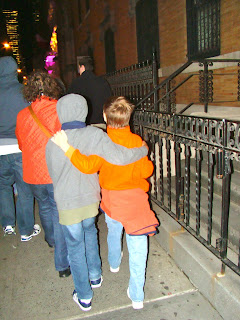 We walked from Times Square toward Rockefeller Center.  And saw some sites along the way. 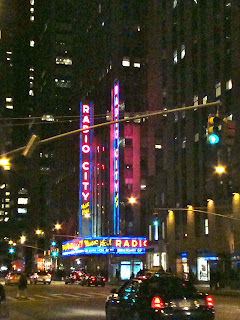 Seeing the Lego store was on the list for some in our group.  This sign was made from lots of mini figures!  Lots of them! 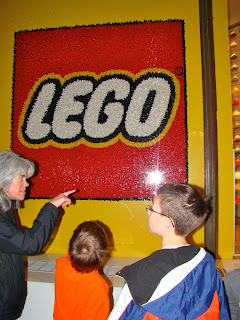 Picture of the group - there were just 3 families with us this night.  Cracked me up how they lined up.  Almost by height! 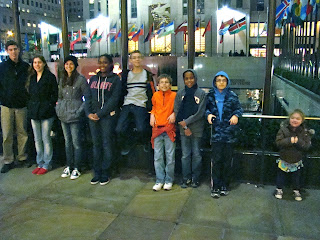 The statue and soon to be ice rink. 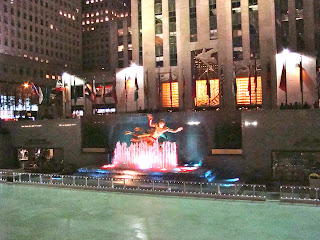 Loved all the flags and lights. 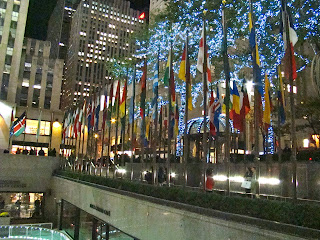 This is a replica of the Rockefeller Center made from Legos. 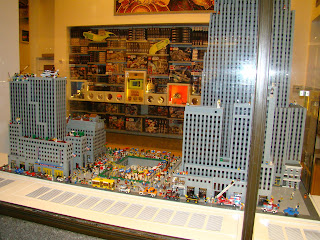 It was fun and the details were great.  They enjoyed spotting some of the superheroes in various spots too!  Inside the store was a copy of the statue Atlas made from Legos.  I couldn't get a picture because we arrived just as they were closing.  (We made it the next day.) 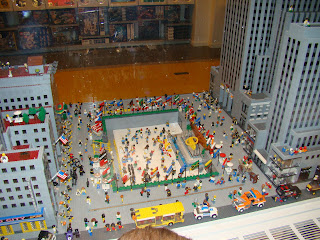 We walked a little farther to Saint Patrick's Cathedral.  I couldn't get a good picture of the outside because they are renovating and there was a lot of scaffolding around.  Here is a link if you want to see a  picture. 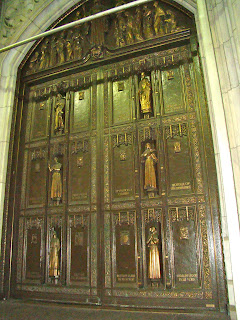 We went inside and looked around a bit before they closed.  What a beautiful and huge church. 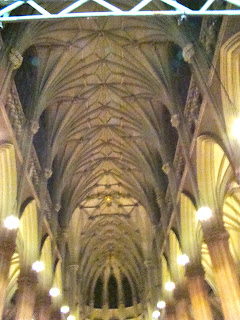 Just some silliness outside. 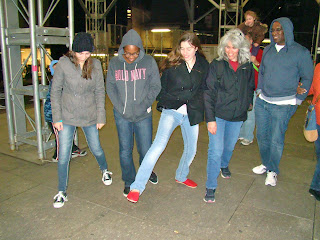 Daniel nudged me when we were walking outside to show me what he had found just across the street from the church.  Do you see it? 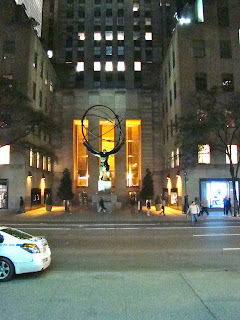 Its the statue of Atlas.  Just like the one in the Lego store!  He was so excited.  I thought it was pretty neat too! 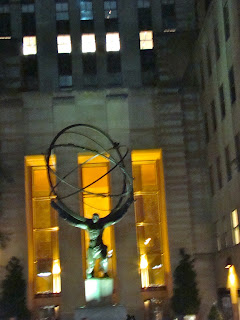 We walked down 5th Avenue and did some window shopping.  It was so tempting to go into the American Girl store!  Maybe on another trip!  We made it back to the bus station and some of the guys posed for a photo for me.  I wanted one in front of a newsstand!  Though this is a much larger stand than the one we read about in our book. 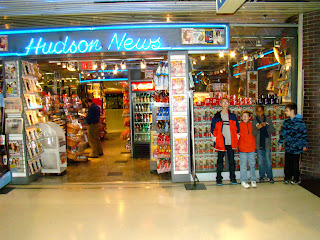 Due to the volume of photos, I'm going to split up this trip into several posts.  I hope you enjoy seeing some of our fun in the Big Apple.

We loved our visit there.  We were there just two weeks before Sandy hit the area.  We are still praying for the many affected by this storm.

I'll post more tomorrow (or soon) about our next day in the city!

Blessings
Leslie
Posted by Leslie at 3:42 PM 2 comments: Links to this post