JDRF Retreat and a great week-end!

We had a wonderful week-end!  I hope you did too.  We were going in different directions for some of it and then all gathered together again.  Here's a look at some of what was going on.  Joshua and I left on Friday to go to Greensboro for the 2nd Annual JDRF Family Retreat.
I had thought more of us would go, but it worked out to be just us.  And we had a great time.  As did the others.  Daniel and Isaiah went to a friend's fun birthday party.  Eliana, Rebecca and Roger watched Tangled and laughed together.  Rebecca had her first guitar lesson in a beginner's Praise class at church.    All fun.
Joshua and I arrived at the Grandover Hotel on Friday afternoon.  We listened to Adventures in Odyssey cds on the way there and just talked.  He was unsure about whether this would be a fun outing and I assured him that it would be a blast!  We checked into the hotel.  What a NICE hotel!!! 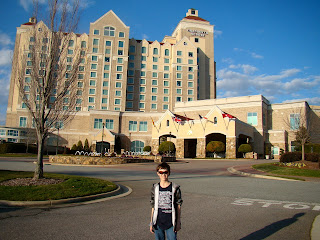 We got registered for a the sessions we would be attending.  Joshua was thrilled to have been included in the teen group.  They worked on making a film which was a lot of fun.  They also had a seminar on the various research that was being done in the search for a cure.  He was quite interested in all that was being explored.  (I had a session on the same topic later and it is fascinating!)
We explored the hotel and played some Bananagrams before heading down to supper. 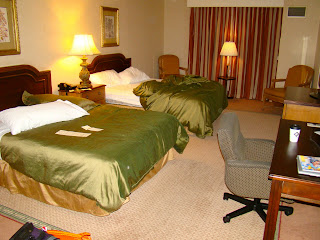 This year instead of having everyone in one big room, they had us divided into the three regions of the state  - all meeting in different rooms.  We  headed to the "Triangle" room and then found that each table also had a label indicating a city or county.  It was a search to find ours.  There were several with Durham on it and we chose one and sat down.  We were with 2 other families that lived in the northern part of our city.  It was a nice dinner talking with and getting to know them.  One of the families we ended up being friends with and ate all of our meals together and just enjoyed hanging out.  Their daughter with T1 (Juvenile diabetes) also has celiac so we had a lot in common.  Our meal was a mexican bar which was both diabetic and celiac friendly!
At the end of the meal, we were told to look under our chairs to see if there was a sticker.  There was one  under mine which I handed to Joshua so that he could go claim a prize.  It was this neat backpack with a sleeping bag inside.  There was also a flashlight which you shake to power it up, a small fan with messages on the blades and a calculator.  It was a neat prize! 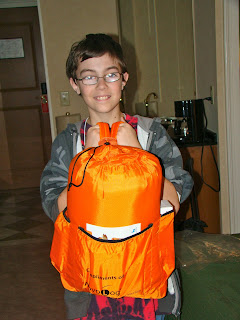 After dinner, there was an ice cream social and magic show.  The  crowd was HUGE!  They didn't anticipate so many people and ended up doing a second showing.  We waited in line and saw all of the magic show while we were in line.  We then took our ice cream to a cozy spot in the lobby area and ate it and talked. 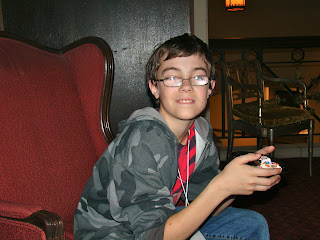 After our dessert, we went to check out the game room.  It was full and busy so we decided to go back to our room.  We played some more Bananagrams, had a devotion together, talked and then got some sleep.  We had an early morning because Joshua wanted to be at breakfast at 7am when it opened.
This is a picture that we tried to take of the bar area and ourselves.  We are mostly covered by the flash.  LOL 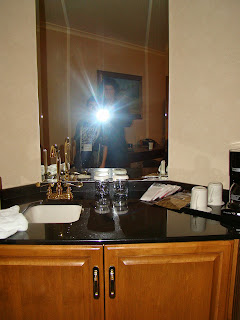 Lots of scenes like this throughout the day.  Its nice to be somewhere and have all of it be something the everyone understands.  This is a tough disease.  One of the presenters that I listened too stated that it was the most challenging of all the autoimmune diseases.  It is a challenge.  I'm so very thankful for all of the advances that have been made that make it so much more manageable! 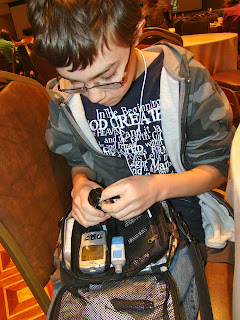 At all of our meals, there was a listing of the foods with both a carb count and also stating whether an item was gluten free or not.  I appreciate the sensitivity to both of these diseases!  (For those who don't know there is a higher rate of Celiac disease among those with Type 1 diabetes than is in the general population.) 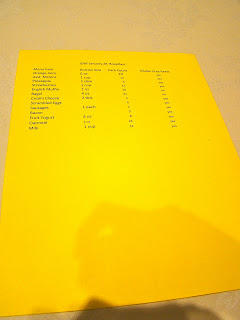 I attended a workshops on managing diabetes during times of stress - sickness and athletics.  Excellent information.  I also attending one on life with teens and diabetes.  Again, good information on how to better communicate and help manage this disease on top of hormones and other changes.  The next session I attended was on Celiac disease.  And the final one on the most up to date info on research being done.  All were helpful and informative!  I'm glad we had the opportunity to go!

We did get in some game time too.  A little after breakfast and more at the end of the day. 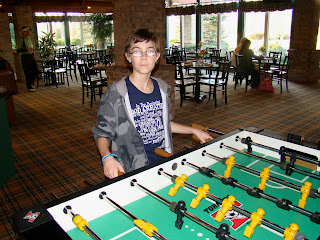 We headed home late in the afternoon after visiting a little bit with a local friend who came by.  Joshua loves these revolving doors!  He also thanked me for taking him and said that he had a great time!  I did too.  I loved having one on one time to spend with him.  I am also thankful for the information we both learned and hope it will help us both to better understand and manage his diabetes.  I think it is a blessing to be at this type of event for so many reasons and I'm thankful to JDRF for all that they do to make this a reality! 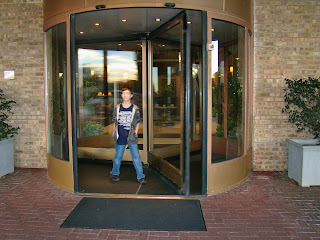 We headed home and were looking forward to seeing Christopher and his roommate later that evening.  While on our way, we found out that he was coming by with 4 friends and it would be close to dinner time.  Of course, we were happy to have them!  My sweet dh and daughter worked to get things ready and I helped when I got home.

What a treat to have Christopher and his friends here!  We loved getting to know some of his friends that we hadn't met and of course spending time with his roommate that we already love hanging out with.  We laughed and played and had a great time.  As soon as they left, my kids were asking when they could come back again!  I agree.  We would love to have them all again soon!

Sunday we spent our morning at church listening to a wonderful sermon.  I hosted a Reading Games activity bag swap in the afternoon and then we headed to Awana in the evening.  Busy, but fun day.

All in all, the week-end was wonderful!  God was good to allow us to make friends with some people facing both Diabetes and celiac that live close to us.  We are hoping to get together again too.  God was gracious to allow us to have Christopher and his friends over for several hours to eat, hang out and laugh ... a LOT.

I am thankful and blessed!
Leslie
Posted by Leslie at 1:20 AM 2 comments: Links to this post