This is my last catch-up post before I get to our vacation.  I wanted to finish up our time with George Washington Carver too before moving on to our next Beyond FIAR title which will happen later this week.  :-)
We started our morning with a devotion.  Its a nice way to put our focus on God and what He has done that relates to what we will be learning about. I started with a game to see how much they knew about sweet potatoes.  North Carolina is the number one producer of sweet potatoes in our country (more than 40 percent).  To play the game, I would read a statement and they would try to figure out if it were true or false.

Some of the statements included the following:

Yams and sweet potatoes are the same thing.  (False.  They are two distinct vegetables which are often confused.  The yam is a starchy tuber generally imported from the Caribbean.  It differs greatly in taste, texture and appearance.  The sweet potato belongs to the Morning Glory family.)

Sweet potatoes were brought to American by the Africans.  (False.  Native Americans were growing sweet potatoes when Columbus arrived in 1492.)

North Carolina is the top producer of sweet potatoes in the nation.  (True, but you already knew that.  NC has ranked No. 1 since 1971.  Its hot, moist climate and rich, fertile soil are ideal for cultivating sweet potatoes.) 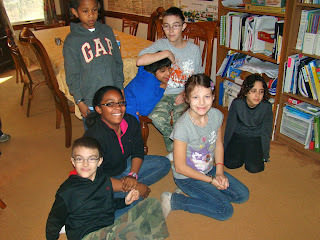 It was interesting to see what they thought and I don't think there was a single statement that they all agreed on completely. 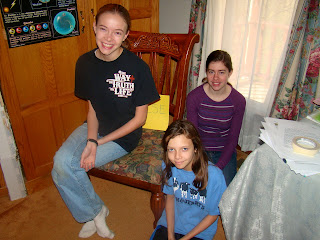 We also talked about some of the nutritional information on sweet potatoes.  They are better for you than regular potatoes and much better for a diabetic as they are a complex carb.

The next game we played was to highlight some of the discoveries that George Washington Carver made about the sweet potato and peanut.  Did you know that he developed over 100 uses for sweet potatoes?!  Isn't that amazing?  God gave him such a gift and he did use it fully!  He held only 3 patents for all of these discoveries as he believed that food products came from God and that it should not be a source of profit but rather available to all.  He also discovered over 300 uses for peanuts!

Each child was given a card with a  peanut on it and another with a sweet potato on it.  I read an item and the children tried to decide if it was something made from a sweet potato or peanuts.  A few of they were from both. 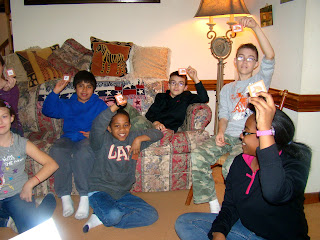 *** During the wheat shortage of 1918, Carver experimented with making flour from dried sweet potatoes. The U.S. Department of Agriculture brought him to Washington, D.C., to discuss the feasibility of producing large quantities of sweet potato flour, and plans were put in place to conduct some large-scale experiments. But when the war ended, so did the wheat shortage, and demand for alternative sources of flour faded 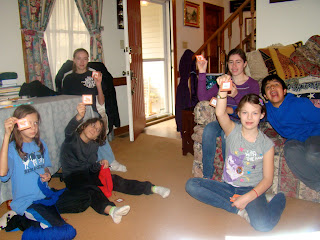 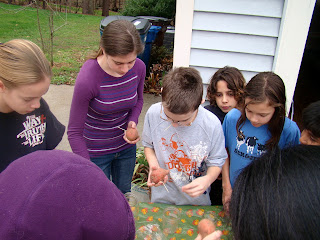 We have had ours now for a couple of weeks and this experiment did not work for us.  :-(  I remember doing this as a child and getting a great plant.  Not sure why it didn't work this time. 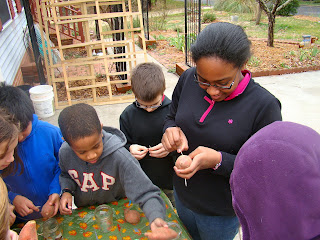 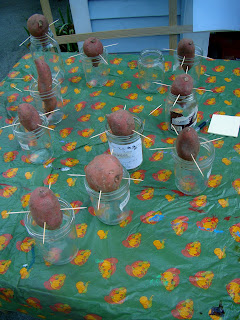 For our snack, we decided to have a sweet potato feast!!!  We made SEVEN different foods from sweet potatoes for the children to try.  Isaiah liked doing this so much that he thinks we should pick a different vegetable and try this again at home.

Here's what we ate from left to right. 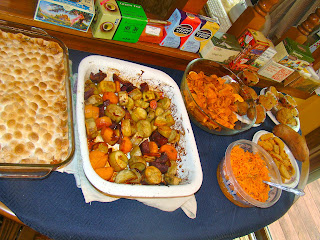 What I didn't get a picture of were the two that were some of the biggest hits!  A creamsicle smoothie and a Caribbean stew!  Both were delicious and we have made them both at home since then.

I found the recipes on this wonderful site.  NC Sweet Potatoes  There is also a lot of great info on sweet potatoes here. 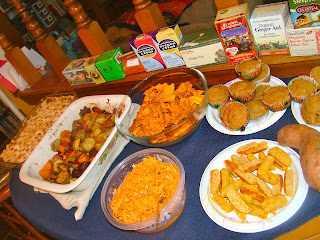 For the next part of our co-op, we learned about insects.  This time we focused on their wings as a means of identifying types of insects.  "Tera" means wing and you will see this in the names of insects.  (Ex Lepidoptera means scaled wings and is the class of butterflies and moths.) 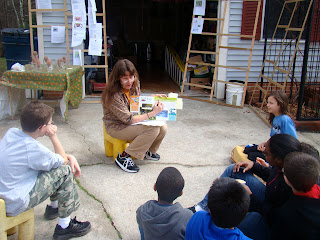 This book was a great resource in learning about insects. 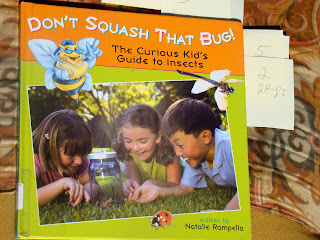 It is both informative and visually appealing which I find to be a great quality in a book! 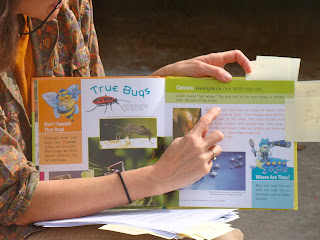 After learning, we did a hands-on fun project.  In our story, we learned that Dr. Carver was an expert at identifying insects.  One time, some of his students put together pieces of several different insects trying to stump their teacher.  He was not fooled and called this bug a  "humbug".  We now let the children make either a realistic insect or they could choose a humbug. 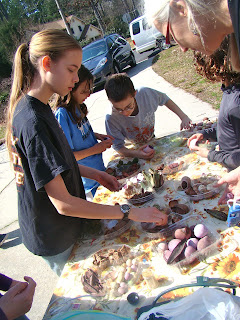 With a variety of materials and a hot glue gun, they went to work. 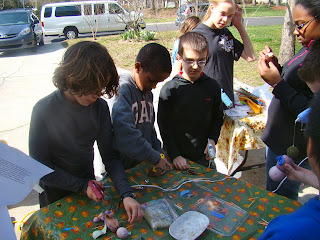 They all were very interested in this which was fun for me to see.  I don't always tackle these types of projects with my boys and I can see that I should do this more often!  They loved it. 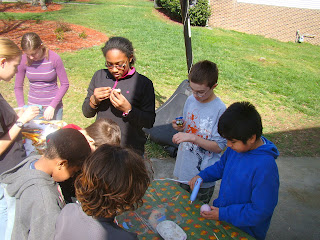 Can you see his neat bug? 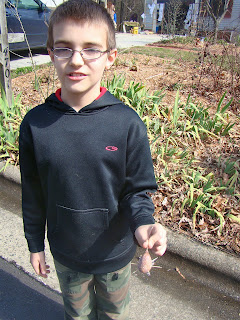 I loved all of them. 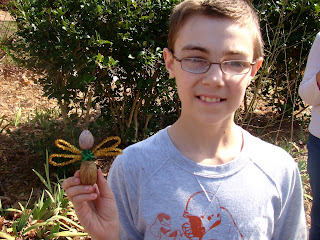 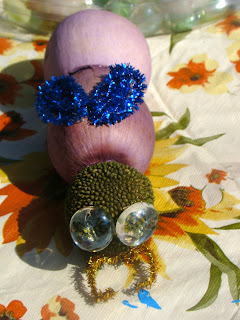 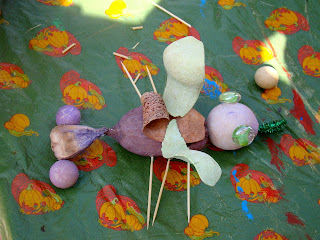 Time spent creating is not wasted, but is a fun time of using the gifts and talents that God has given all of us - to be creative - just like He is. 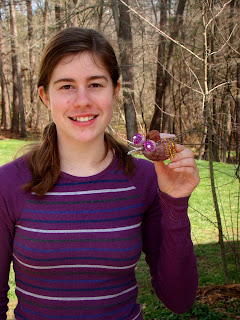 And the smiles and laughter while they were working was sweet to my ears as well. 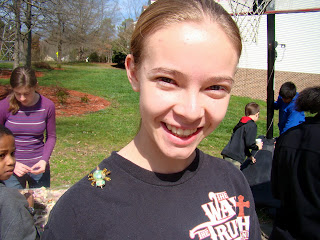 THis is quite a collection, wouldn't you agree? 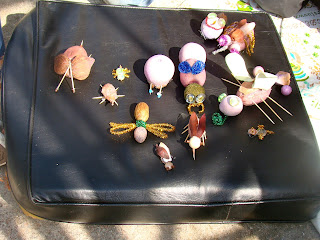 They took turns sharing details about the insect they had created and if any of the details fit into some of the categories that they had learned about earlier. 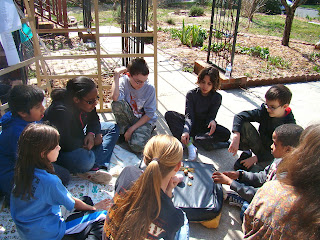 My only question now is what do I do with these when I get home?  (Its one of the reasons we probably don't create more.  *blush*) 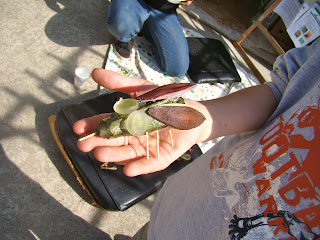 As always, a fun time learning with our friends.  I'm thankful for this time and this group and for the sweet memories we are making here and at home as we study our Beyond Five in a Row books!
Blessings to you as you learn new things today!
Leslie
Posted by Leslie at 11:54 PM 4 comments: Links to this post