A visit to the doctor

So, its been about 2 weeks without my computer.  I am using a laptop for emails, but don't have access to my documents or photos yet.  Roger has been working on getting everything moved to a new computer but it isn't all there yet.  Its been challenging - and sometimes frustrating.  Though to be honest, I've mostly not worried about it since there is nothing much I can do.  (Wish I could do this with all areas of my life!!!)

I am missing blogging though - and getting further and further behind.  LOL

I did want to post a quick update though.  I took Eliana in to see the pediatrician this week.  Her last visit was in June (several times) for another round of blood work to confirm Celiac disease.  At that appointment she weighed 27 pounds and was 35' tall.  Definitely on the petite side for a 4 year old!

The doctor immediately noticed her color and her demeanor and said how much better she looked!  Happy and  social and just back to herself.  :-)  Thankfully we had no "owies" at this appointment which was a nice change from her last round of visits. 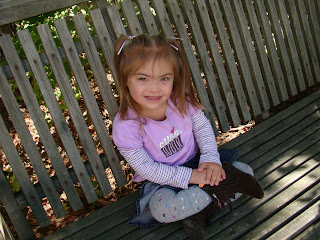 The big news ... her height and weight.  This appointment was really to check and see how she was doing since diagnosis.  (And as a parent of a child dealing with a medical condition, I have to confess that sometimes these meetings seem like an evaluation of my ability as a parent to help my child monitor his/her medical condition.  Is the number going to reflect that we have done what we are supposed to be doing?  I've at times been made to feel like I not doing a great job, though never by our wonderful pediatrician!)  Anyway, it was nice to feel like all the work that has gone into changing her diet has made a difference.

Are you ready for her numbers?!

Just shows that it really is important for her health that she be gluten free.  I knew that, but it is still nice to see that it has made such a huge difference.  I can see that too though in just the way she feels.  She is so much happier now than she was earlier this summer.

Next week we have another appointment.  This one is her yearly visit to the cardiologist.  I'm expecting it to be an easy one and hoping for no surprises!

More later as soon as I can figure out how to upload pictures from my new computer.