I started this post on Tuesday and then just didn't finish it.  Monday was a day.  Some of it planned and some of it not.  Several of the things though made me realize how I rely on things other than God in recognizing my own worth.  Some lessons you think you learn and then you realize that the layers go deeper and there is still more to pull away.

I love being a Mom.  It has been the most amazing blessing to have and raise children.  I truly could not imagine doing anything that I love more.  The joys.  The discoveries.  The hugs and kisses.  All of it.  It has also been the hardest thing I have ever done too.  From sickness to pain and trials - those that are on the outside and the harder ones that are on the inside.  Being a parent has caused me to recognize my own frailty and my need for God.  It has caused me to fall to my knees so many times as I'm just not strong enough to do this on my own!  (And so glad that I don't have to!)

So, back to Monday.  Not too much going on initially.  I had planned to have a morning at home and then take one of my boys for testing in the afternoon.  Our state requires yearly testing as homeschoolers and I was interested in a test that might help recognize some of the learning struggles he is having.

In the morning, the son going for testing had a cold.  Felt tired.  Said he hadn't slept well the night before.  I checked for a fever.  Nothing really amiss.  Debated going and in the end just decided to push through it.  (That was not my best decision and in hindsight I wish that I had just taken a different son - but no crying over spilt milk.)  On our way there, he declined to eat the food I bought him.   A favorite. I'm not sure if it was nerves or what.  He also mentioned again being tired.

So, he did the testing.  Honestly, having your child tested is not a huge surprise.  You know your child and where they struggle.  Sometimes though maybe it just doesn't seem as bad.

The testing did reveal struggles and strengths.  It was nice that there were both.  She also shared some suggestions of things to try with him.  It is hard though too - seeing the numbers and knowing your child doesn't "measure up" to where they should be in the learning.  That is one of the blessings though of schooling at home.  We can move at the pace of our children and do what is best for them.

When you are teaching your own children, its hard not to see yourself as "successful" or "failing" based on how your children "perform".  I really am not a fan of testing for those reasons.  (I do believe that testing can be good and helpful in some circumstances, but not really necessary for all students.)  It is easy to question if you are doing enough.  Do I spend enough time here?  Are my priorities in line?  Can I do this?

Why do these doubts and whispers of failure come?  Why is it so easy to listen to the accusations?  Where is the truth in what I am hearing?  Whose is the voice that I'm listening to?

Is a child who struggles to learn a mark of a poor teacher?  Or perhaps his struggles would be even greater if he were in a different environment that didn't allow him to learn at his own pace.

So you can see where my day was heading.  It wasn't one of those days where I was excited about all that had been done and feeling good about my own performance.  Maybe though, that is really the point.  My focus can sometimes wonder off the goal.  My eyes and heart need to be encouraged to look to God for everything- strength, purpose and joy.

It was nice to have some sweetness in my day come after all of this.  I've been wanting to make Valentines for the grandparents and last night decided that this was it!  I had seen some cute ideas online and decided to try a few of them out.

She loved stamping and painting.  We did hearts first.  (Yes, that is just a bent toilet paper tube.  Pretty clever isn't it?  I found it on Pinterest.) 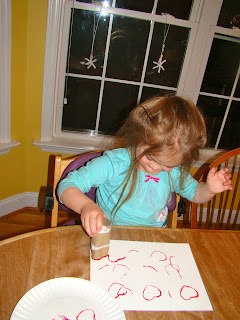 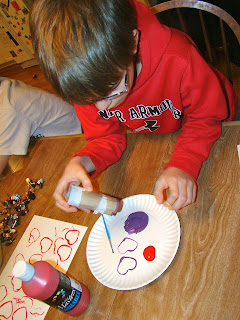 Then some painting with fingers. 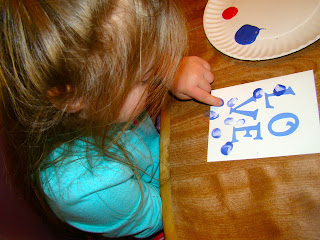 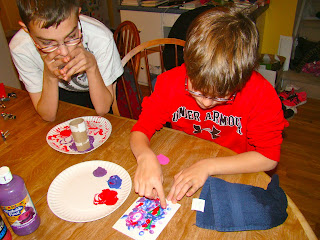 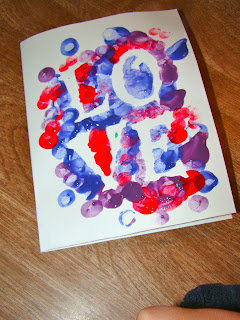 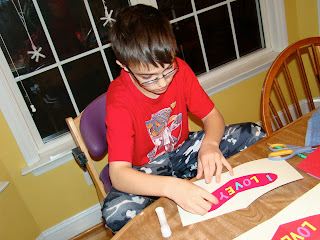 All super cute.  Everyone joined in the fun.  It was one of those moments that just made my heart happy. It wasn't about me being a "good mom" but more that God was blessing my day and reminding me of so many things.  What I'm doing - though hard at times - is also filled to overflowing with joy.  My children are gifts to be enjoyed and to delight in.  Our days and nights should be filled with laughter and messes and fun.

In the end, I'm called to remember that God loves me and is working in me just as He is working the lives and hearts of my children.

I'm thankful for that too.

Blessings
Leslie
Posted by Leslie at 2:11 AM 5 comments: