FIeld Trip to the Outer Banks!

I am always up for a fun field trip.  I'm thankful for friends that are too!  What fun we are able to have together!  While studying Neil Armstrong (Beyond FIAR), we also spent some time learning about the Wright Brothers.  Since there is a memorial close to home - in the very spot where they flew their plane - I thought a field trip was in order.  We have visited this site, but it was just before Eliana was born so the younger boys were pretty little when we were there.

Getting a groupon for a hotel in Kill Devil Hills just sealed the deal for me!  I mentioned it to our co-op group and was delighted that 4 friends were interested in going on the trip too!

We picked our dates and made reservations.  Unfortunately, as the date drew nearer, the weather forecast was horrible.  Cold and rainy.  Calling for 80 to 100 percent chance of rain.  Ugh!  Well, we prepared for it by packing extra clothes, umbrellas, layers and lots of towels.  As we were driving down, I was delighted that it had not yet started to rain.  Then the forecast shifted to pushing the rain back until lunch time.  This was great!  Some time to explore outside before the rains hit!

We started at the Wright Brothers Memorial. 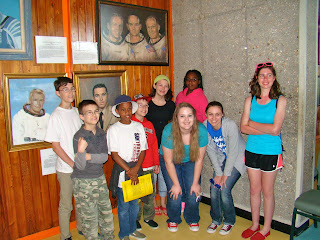 We thought is was fun to have a photo with Neil who inspired this road trip! 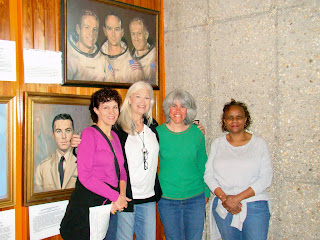 Since this is a National Park site, there was an opportunity to earn Ranger badges!  Daniel and Trent were delighted and I think it was fun for them to work on it some together.  Eliana did a bit, but wasn't really highly interested.  Maybe another day. 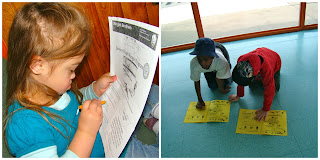 Trying to get a quick group photo.  "George" is a stand-in for Eliana in the second photo. 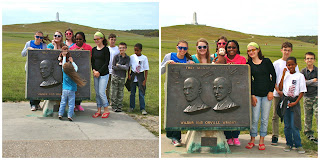 Learning from reading the signs.  The building is a replica of the one that they lived in while they were here.  It was surprisingly nice inside. 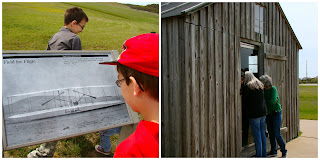 Love this path which marks the spot where the Wright brothers flew their plane.  There are markers along the path showing how long each of the flights actually were as well as how long each flight lasted.  The boys wanted to race to see who was faster - the plane or the boys.  Boys won on this one. 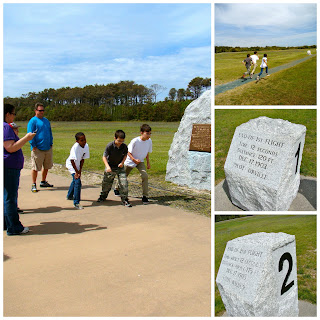 The last flight was the longest and was pretty impressive.  I'm sure it was a thrilling moment!  Loved the view of the monument from this place too. 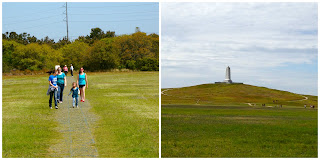 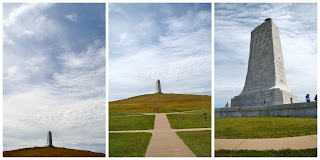 Love all of these faces!  The beautiful girls.  The handsome boys.  Can't you just see that this was a sweet and fun time? 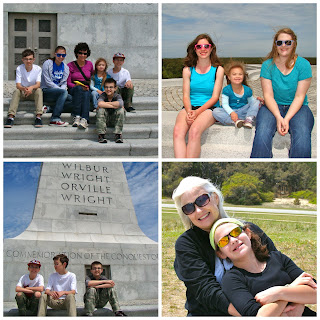 After spending some time on the monument, we went to a picnic area near the base to have lunch. 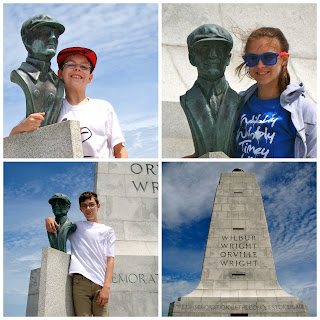 After lunch, as we were driving out, we stopped by this model of the plane.  There are also statues of some of the people that were there.  The children LOVED playing and interacting with the statues.  It was quite funny and I think it makes for some delightful pictures.  What do you think? 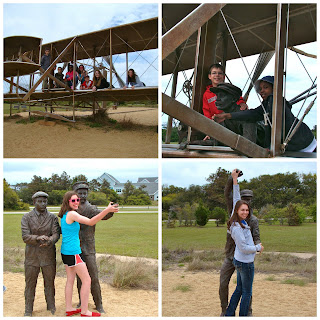 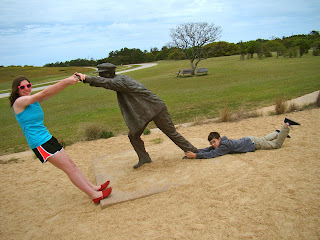 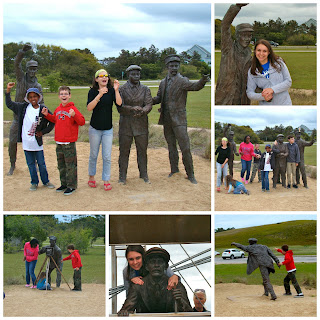 We are still experiencing a reprieve from the weather.  The latest update looks like rain at 3pm and not lasting more than an hour.  The next day though is 100 percent chance of rain all day long.  We had planned to visit Bodie lighthouse the following day but due to weather made a change in plans.  It wasn't far, so we drove on over.  Isn't it beautiful! 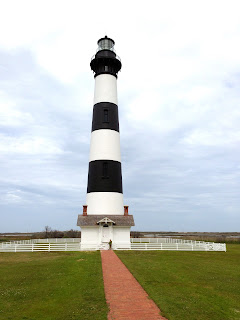 Bodie lighthouse has undergone some renovations and for the first time was open to the public!  What fun!  Have I mentioned that I LOVE lighthouses!  I know I'm not alone in this feeling either.

We bought our tickets and went on a tour to the top with a ranger.  In the pictures below, the top right is  on the bottom floor of the lighthouse and was used to store things.  The next photo down is the entrance to the room where the stairs begin.  The bottom right is a shot looking up through the stairs.  The bottom left is a sign inside the lighthouse.  You can see the change in spelling which also indicates the correct pronunciation of the lighthouse.  Its just like "body".  There are various stories as to where the name originated. 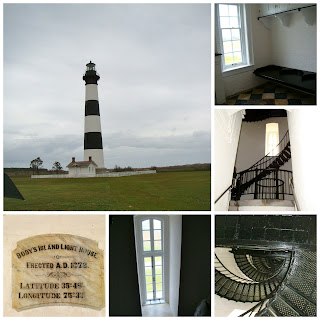 It was very windy at the top!  So thankful for a beautiful afternoon.  We had a little bit of sprinkles, but that's it!  Thankful!  And happy.  I love these big smiles! 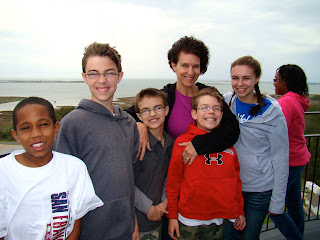 Here are some of the shots I took from the top of the lighthouse.  The view is beautiful.  Nothing much is built up around this lighthouse so you have clear views of the marsh and also the ocean.

We also had a view of Eliana bossing around our friends in a game she had made up.  I wondered why they were laying on the grass and heard about my bossy daughter when I got down.  LOL  The house is the lighthouse keepers home that is now a gift shop and offices. 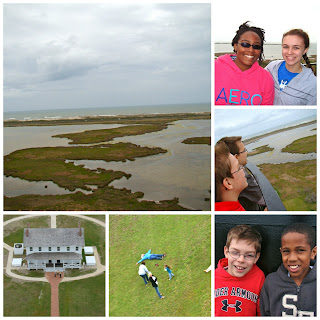 I took a lot of pictures of the lighthouse.  I think it is beautiful.  (Though not quite as much as the beautiful young ladies in front of it.) 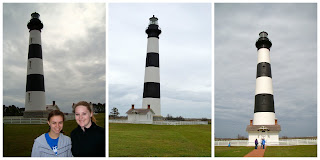 Still hanging in with good weather so we now head over to Jockey's Ridge.  Its open later in the day and was the top request of my boys.  I really wanted to be able to go there and the following day was going to be a bust in terms of weather, so we headed over.  Managed to get a shot of some of the group before they headed inside the visitor center. 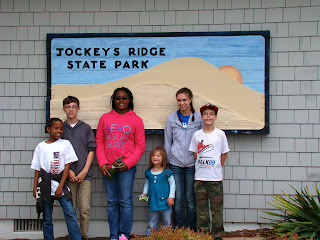 There are great hands-on displays inside.  Informative, interesting and fun!

Heading down this path to make it to the dunes.  Jockey's Ridge is the tallest natural sand dune in the Eastern United States.  Well worth a visit.  It is beautiful and fun for people of all ages! 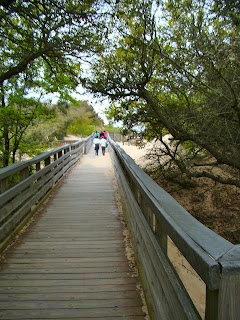 A shot of the group before they took off for the dunes.  It was hard to keep up with them after that! 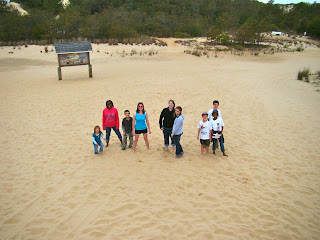 I'm not sure if you can tell how steep the slope of this dune is from the photo, but it so quite tall - and big/wide.  And the view at the top is amazing! 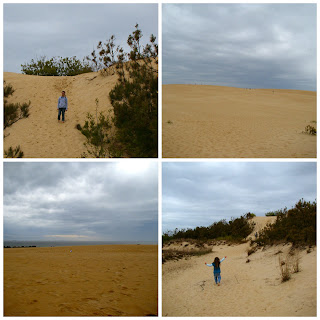 View from the top of the sound on the other side.  Isn't this gorgeous! 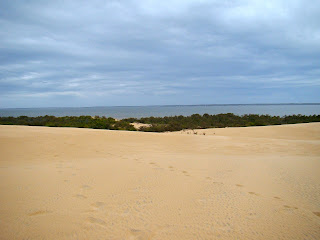 From flying a kite to climbing the hills, from sliding to rolling down, it was all fun!  The children LOVED being here!!! 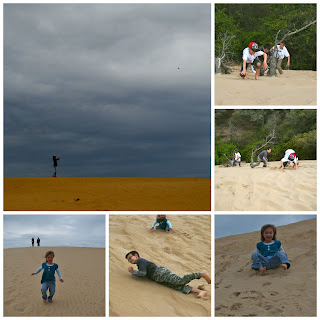 We packed a lot into one day, didn't we?  And yet it wasn't rushed.  It was sweet time spent learning, laughing and having fun.  Some of my favorite of our homeschool days! 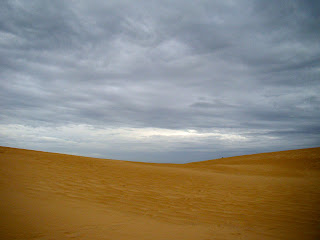 An amazing display of God's handiwork.

This trip is worth it if you are considering it.  Even for just a couple of days.  We spent just 2 days there and were able to do a lot.  Now, I would have loved more time, but we'll save that for another day.  :-)


Posted by Leslie at 12:22 PM No comments: Links to this post