Some days just end up being not what you had thought.  It goes back to making plans.  So many days our plans work out and the schedule is followed and all seems right.  Then there are other days.

Many are the plans in the mind of a man, but it is the purpose of the Lord that will stand.  Proverbs 19:21

Last Thursday, Joshua got sick.  I thought it was a stomach bug and we treated it as such.  As the day went on though, things just didn't get better.  And by night time things were really bad.  I had been out with the other children at a play (Rebecca was performing) and when I returned and looked at Joshua, I just knew.

We were going to be headed out. 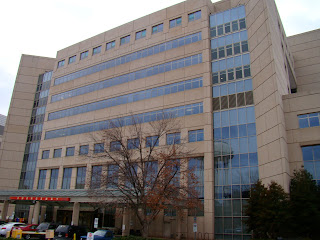 I talked with the doctor on call to confirm what I thought was best and then Joshua and I headed out.  He was miserable.  Very dehydrated (unable to keep things down despite our best efforts).   High ketones.  Very high blood sugars.  (Again,  just not coming down.)  I didn't take a picture of him in this state.  It just didn't seem right somehow.  He looked bad enough that one of the nurses even asked if this was his normal skin color.  (No, it wasn't.)

We went to UNC hospital.  Its where he is seen for clinic visits.  He was admitted to the peds ER and quickly diagnosed with what I already knew he had.

That's the simple definition (well, maybe).  Ketones are dangerous because they can wreak havoc on the whole body causing damage to other organs in the body. 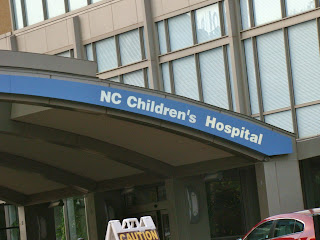 We spent hours in the ER as they tested and started treatment and we waited for a room.  Joshua was moved up to the PICU at about 4:30 in the morning.

We found out the following morning that the attending doctor was a friend.  That was a sweet surprise.  He was wonderful!  As were all of the nurses that cared for Joshua.  We could not have asked for better care!

Joshua stayed several days in the PICU - less than originally anticipated as he responded quickly to the treatment.  He was hooked up to a number of things - several IVs, pulse ox, blood pressure, heart, etc.  And obviously had his blood taken or tested many times. 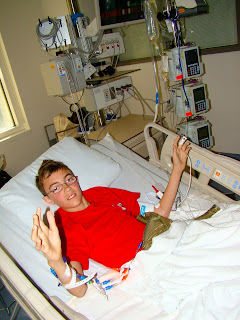 One afternoon, when he was feeling better, a volunteer came by to see if he would like to play a Wii game.  He loved this distraction!  What a great opportunity for a volunteer too! 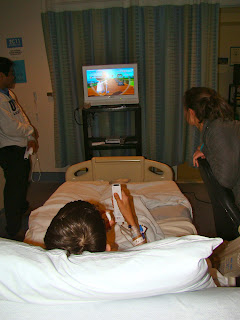 Wonderful nurse Daniel taking great care of Joshua.  He really went above and beyond the regular care to make Joshua comfortable and also to make him laugh. 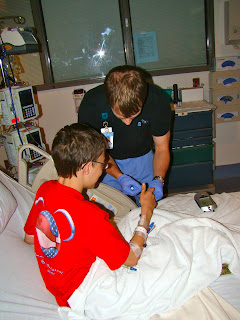 Not many visitors in the PICU as you had to be 13 or older.  He was happy to see his Nana (my mom) and his sister one afternoon.  And another sweet friend that brought a balloon, game, snacks and cards from her kids.  (Joshua loved these and said it made his night.) 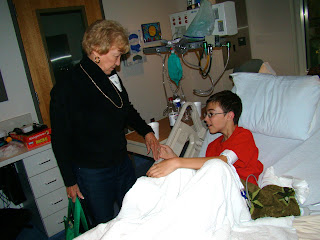 He skyped with his younger siblings which was a great option all the way around!  You  have to love modern technology! 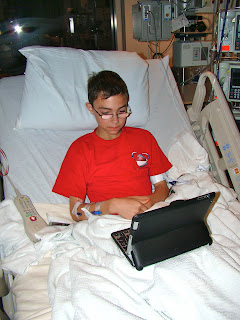 We filled the time reading a good book (The Westing Game), playing games (he won most of them!) and just talking. 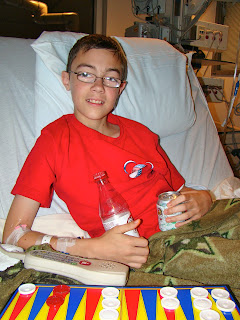 On Saturday night, he was moved to the regular floor.  He was so excited to lose some of the many cords and to have the freedom to get out of bed.  Interestingly, he was moved to the same room that he had when he was diagnosed.  We both recognized it immediately.  (And so did one of his brothers too.)

The next day was his final day there and he had more visitors.  Christopher and Emily. 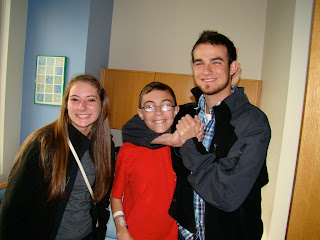 His younger brothers too.  (Eliana had a runny nose so she stayed home.) 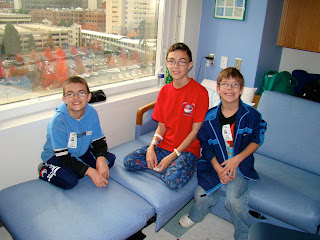 Friends too.  The stay in this room was short - less than 24 hours.  Soon it was time to head home. 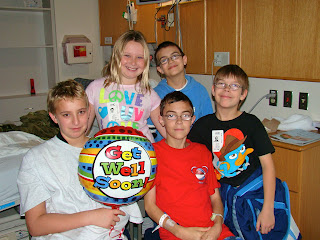 While we were in PICU, I saw a number of Life Flight helicopters.  The landing pad must have been near the window.  Reminded me to pray often for someone coming in needing critical care.  Joshua was not able to see them due to where his bed was in relation to the window.  We did see one coming in from his regular room though.  I'm thankful for this system that I know helps to save many lives! 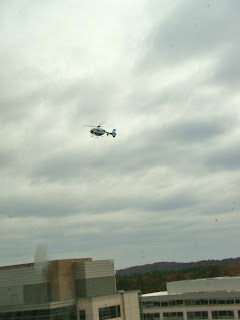 We headed home with his numbers in a better range.  Changes were made to his rates and hopefully this will help to keep this from happening again.  Puberty and diabetes are a hard combination.  I've heard this often and I've seen it too. 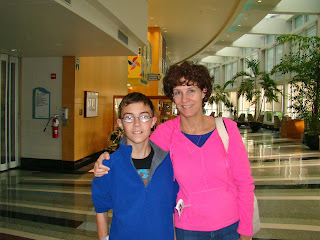 This was a scary reminder of how serious this disease can be.  I'm thankful for the many strides that have been made in helping to manage diabetes.  Praying though for a care because insulin is not a cure. Its a band-aid to help until a cure is found.

This disease stinks!  And that is putting it mildly.  I'm so very thankful though to live when we do so that Joshua has the opportunity to live a full life while managing his blood sugars. 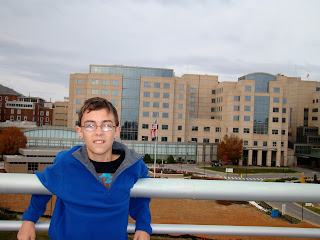 Through it all, God is in control.  I could see His hands in so many things.  His peace, His care, His protection.

Its hard to know how much to write when you are sharing about something hard and it involves your teen-aged child.  I want to share - and he was fine with this too.  I want others to know what we (and others with diabetes) are dealing with.  This disease is relentless and just never takes a rest.  You can't forget about it for even one day.  Its there all the time.

There is still much for which to give thanks.  I'm so very thankful to live close to such an amazing hospital with doctors and nurses that are outstanding in so many ways!  I'm thankful for the level of care that we receive.  I'm thankful to live now so that Joshua has choices and options that the opportunities to live his life as fully as possible.  I'm thankful for family and friends who supported us through this with meals, rides, visits, emails, txts, phone calls and prayers.

I'm thankful for my precious son.

Thankful for the One who gave His Son.

We are still resting and trying to recover.  Joshua has picked up a cold/cough along the way.  So far, his numbers at home have all been good except for one.  Hoping to continue to see great numbers and no spiking or rebounding.

Thank you again for your prayers and support.

Love
Leslie
Posted by Leslie at 12:03 AM 4 comments: Links to this post