"Sticks and stones may break my bones,
but words will never hurt me."

Who came up with that rhyme?  We all know that it isn't true!  Was that the point?  A retort when hurtful words are launched your way?  I'm not thinking that it ever really helps though.  Do you?

What a day.  It began as a cool, sunny morning.  We were full of excitement as we headed to a special church service.  We attend a church that is multi-site and today was an opportunity for us to all gather together - at the Durham Bulls Athletic Park.  And not just a chance for the church to worship in one site but also a huge outreach. 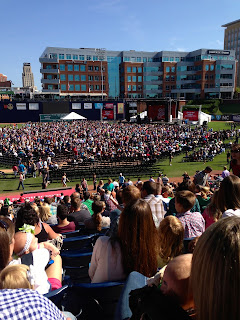 We later learned that this was the biggest gathering of our church - 11,500 people. 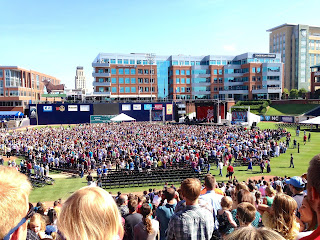 It was beautiful and soon warm as we stood together with thousands of others and sang praises to the One whose words bring hope and healing. 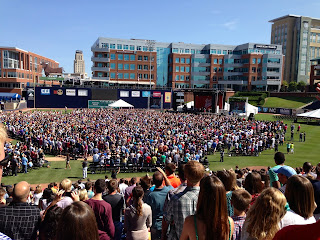 We listened to a message from Acts 2 on the power that changed lives then and is still changing them now.  How I wish that the transformation was complete and that my words, thoughts and actions were always reflective of the One who has changed my life.  Thankfully, God is loving and forgiving and not finished with me yet either. 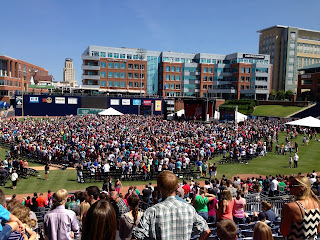 It was awesome to see the power of God's spirit at work today as hundreds of people came forward to be baptized.

After church, we headed out to a picnic.  A picnic where we knew nobody but we were drawn together because everyone had someone in their family with Type 1 diabetes.  It was a delightful event.  There was a bounce house, cornhole, bubbles and of course, food.

Eliana played in the bounce house for over an hour!  The gal running it was so very sweet to her and never asked her to get out.  To say that she had a great time is an understatement. 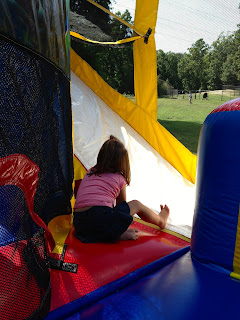 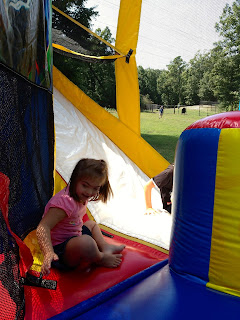 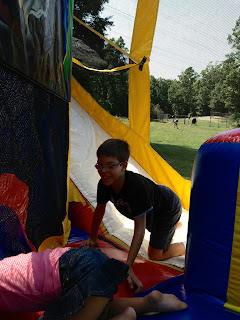 She was delighted.  When we finally got her out to eat, she stayed at the table only briefly.  And the very thoughtful planners even had gluten free food she could eat.  (Sadly, the incidence of celiac is higher among those with Type 1 than it is in the general population.)

There were other things to do.  Ropes to jump and bubbles to blow.  Roger was following her around and she was playing near a few other children.  And out of nowhere came those words.  Words that no child should ever hear.  Words that did hurt.

First laughter.  Then, while looking at my little girl, "She is ugly".

Did those words hit you like they hit me?  Right in the gut?

A sad reminder of the broken and ugly world that we live in.  I'm thankful that Eliana either did not hear or register what was said about her.

Another child there with the first child though spoke up in her defense, "No, she's not."

A sweet reminder that there are those with love in their heart that can see more than other people.

The first child, confidently asserted her opinion again.   "Yes, she is."

And then again the other children disagreed, "No, she is not."

Roger was stunned.  Not sure if he should step in or not as these were two very young children.  He did ask me if I would have said anything.  At first I said that at a minimum I would have affirmed the second child loudly.  That sweet spirit needed to know that he is a brave defender and that we are proud of him!  I'm also not sure if this mama bear could have kept her mouth closed.

I hate thinking that this is the beginning of a day that I hoped would never come.  Do you have tears yet?  I'm typing through them.

On top of having to learn and work so much harder than most people, is she also going to have to learn how to forgive and forget things that no little girl should ever have to hear?

And her mama is going to have to learn so much more too.  How to forgive others who speak of things that they do not know.  How to speak in love so that others can learn.  Jesus was such a good example to me of all of this.  I know that He understands.

So much to learn.  I am thankful for a Savior and I pray that Eliana will come to know Him at an early age so that she too will have His power to love and forgive.

And I for one think she is absolutely beautiful!!! 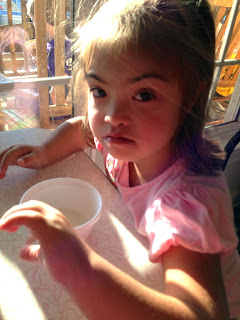