Doing Five in a Row is so much fun - and having an eager student just adds to the joy!  This is Daniel's favorite part of our school day!  I love this and I am really having fun with him.

We gathered with our friends for a co-op.  I didn't get a lot of pictures as I was holding a little sweetie.  They talked some about Ben Franklin and some of the different things that he did.  I loved that she used a variety of props to give clues about some of the jobs he has held.  He is quite an amazing and interesting person.

As you can see, they chose hats to wear and then started working on making signs for their own business.  This story focuses on a man who made a sign for his shop and thought he had gotten it just right but he then got input from many different people as to changes he could make so that it would be even better.  Thankfully, there was no such input today and they just had fun making signs. 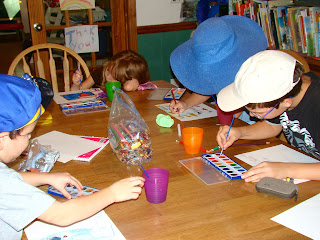 Daniel made one to advertise his painting business.  He even painted some while we were there and sold them with the money that they had each received when money was discussed. 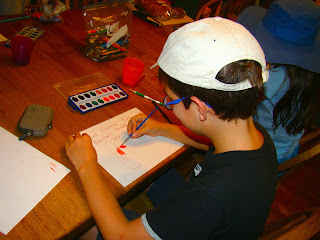 They used their money to buy snacks of their choosing.  They all had a great time with this!  It was another delightful afternoon! 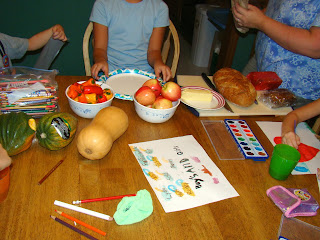 We did some fun things at home with this too.  One was learning to write with a quill pen.  Daniel enjoyed trying out his hand at this. 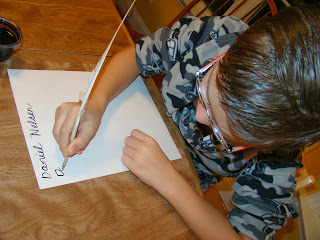 I love his note! 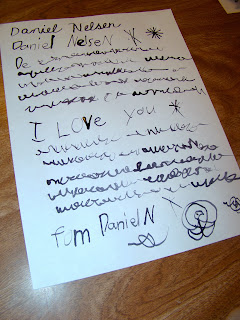 Of course we cooked the meal from the FIAR cookbook too.  This was a traditional meal from the colonial period.  Daniel is a good cook and loves to help out in the kitchen.  All of my children have liked to cook and I know that is a blessing - both now and in the future too! 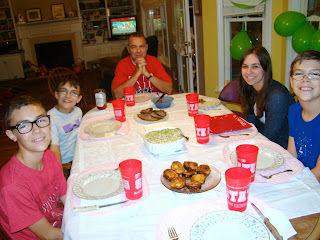 In addition to cooking, Daniel helped to set a pretty table. 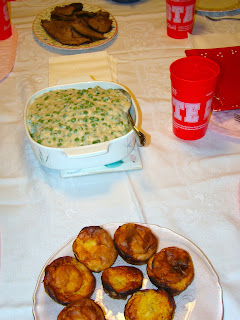 This meal even came with a yummy cake for dessert.  (Nuts on one side only to appeal to all tastes.) 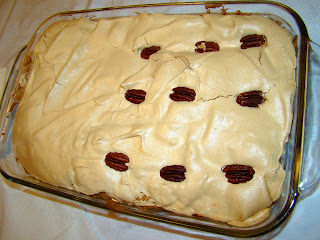 These are some of the additional books that we read while doing this study.  And Daniel also watched a lot of Liberty's Kids.  These are great shows which share a lot about our nation's history!  I highly recommend them! 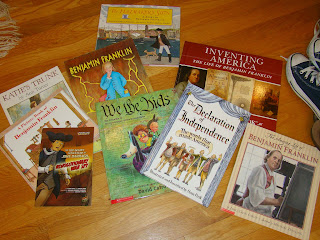 Daniel made several Lego creations during this time too.  I loved his Hatmaker's shop. 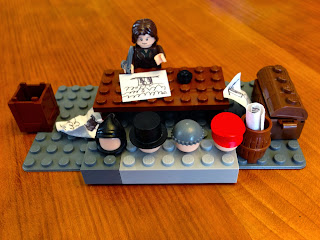 The militia is gathering. 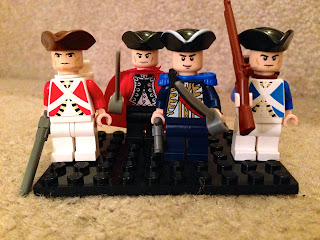 Between the painting, the discussions, watching Liberty's kids, food and more, Daniel has decided that this is his favorite book thus far!  We had a great two weeks and look forward to out next story ... Hanna's Cold Winter.

Blessings
Leslie
Posted by Leslie at 12:43 AM 2 comments: