On to Springfield Illinois

As I mentioned in the last post, we headed out early.  We were expecting a 10 hour drive today and didn't want to get in too late.  As we were driving, we saw evidence of the flooding in this part of the country.  We drove over some heavily sandbagged roads.  (Not sure how those keep the water out, but they were working well.)  At one point, I saw a sign on a road parallel to the one we were on that said "Road closed".  Shortly after that, we saw a street sign sticking up about a foot out of the water.  It looked like a sign sticking out of a lake.  It was unbelievable.  A very real reminder to pray for the many that have been hurt by the flooding.

Here is how we made a long driving day work for us.  We stopped a few hours into the drive at a rest area.  This was a good place to stretch, go to the bathroom and get a snack.  A few hours later, we stopped at another rest area for lunch.  It was a beautiful day and a picnic outside was really nice!

While we were driving, I read aloud another book.  This one on Abraham Lincoln.  We also played some roadside Bingo and scavenger hunts.  I made up some cards and laminated them for the trip.  We used dry erase crayons on these!  They worked great though leaving in the car meant that they got softer than they should and we did have a couple of them break.

We arrived in Springfield in time for dinner.  I had found a Godfather's Pizza that served gluten free pizza!   I was really excited about this.  It was really nice too that it was just a few miles from our hotel!  We had a great dinner and then headed to the hotel for some rest.  We stayed again at the Hampton Inn Suites which is wonderful!

After breakfast the next morning, we headed to Lincoln's home.  Its a National Historic Site.  (I really love these places!)  We arrived in time to watch a movie in the Visitor Center (very well done) and get started on the Junior Ranger badges. 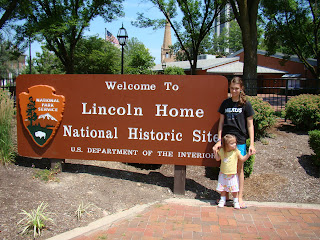 After the movie, it was our turn to tour Lincoln's Home. 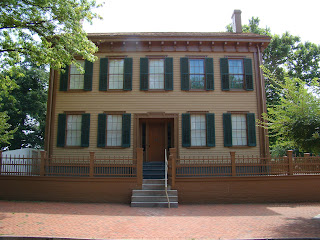 We toured with another family with 6 kids.  :-)  Lincoln's name is on the door. 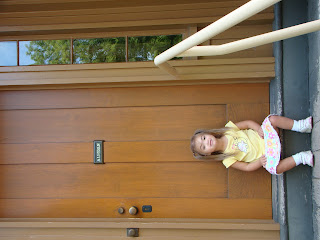 A ranger led us through the home and told us stories about the different rooms - things that happened there or stories about the family.  It was really very interesting.  This is part of the parlor.  I didn't take many pictures as it just wasn't easy to get in a good position for them. 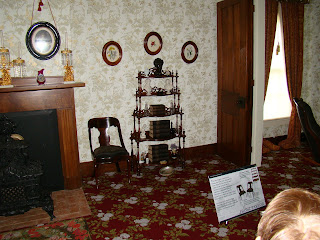 This was Lincoln's desk in his bedroom.  Pretty wild to think of him sitting there.  Another thing I found interesting was the mirror above his washbasin - and how high it was.  Just evidence of it being used by a tall man. 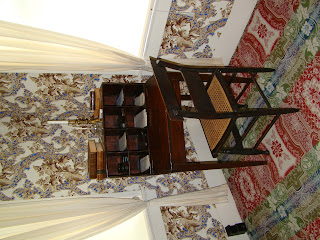 Next we walked out to the street and saw a wagon that was used during his political campaign.  It was designed to look like a log cabin to reflect his roots. 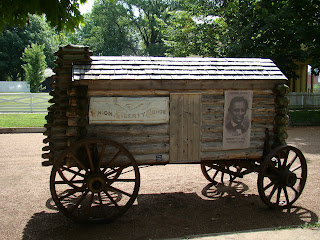 We listened to a costumed interpreter tell us about Lincoln's neighborhood.  He told us about various people that lived on the same street.  Stories about people are always fascinating.  We learned about people that differed with his ideas politically and others that agreed.  We saw where a stop on the Underground railroad was located too. 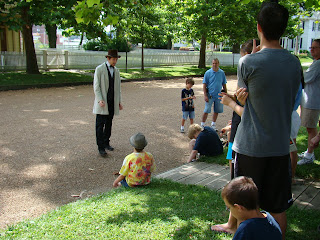 A view of the street. 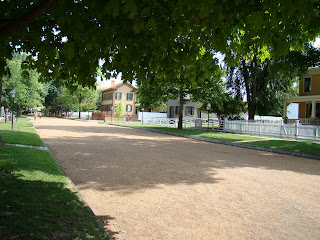 Looking out from the porch of Lincoln's home. 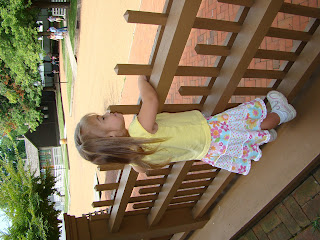 Our newest rangers being sworn in.  (I know its not a great picture, but its the best I have.)  This was the first site that actually did a swearing in for them. 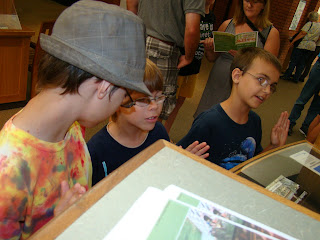 We had a picnic lunch on site and then headed out.  We had a much shorter drive today - just 5.5 hours.  I was excited because we planned to go through Parke County, Indiana - the Covered Bridge Capital of the World.

We saw our first bridge while still in Illinois and stopped to play a bit and look at the bridge. 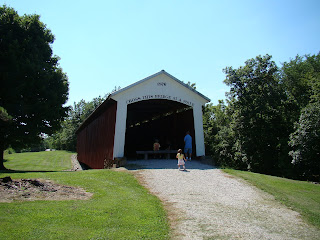 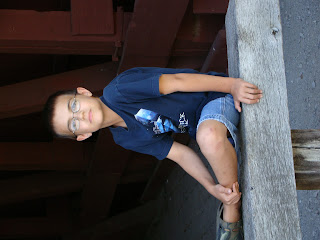 If you look really closely, you may be able to see what Daniel picked out at the gift shop.  Because its dark, its hard to see his new hat. 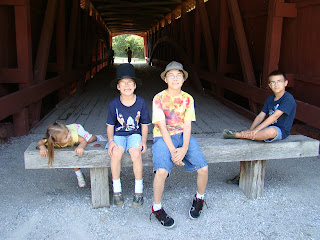 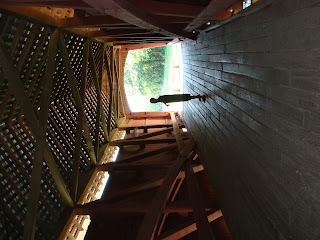 A few more of the bridges that we saw. 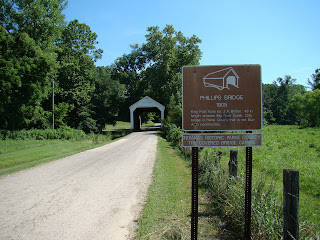 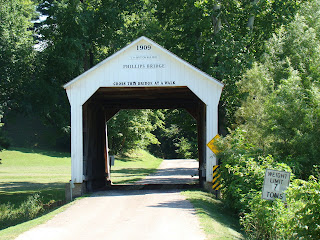 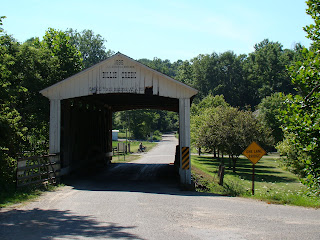 We didn't drive out of our way to see many of them.  We'd all been in the car a long time and knew we still had quite a ways in front of us.  On to Kentucky.

Dinner and then hotel.  This time we stayed at Homewood Suites.  Really nice.  Great deal if you are going to the Creation Museum too!  More on the Creation Museum tomorrow.  We've been on the road now for 2 weeks.  Its hard to believe its almost over.  I'm thankful we have had this time!

Blessings
Leslie
Posted by Leslie at 12:50 AM No comments: Links to this post