A glimpse of our day

Today was a long day, but one covered with prayers.  Thank you friends!  I apologize that I have not been able to make phone calls or talk with people.  Eliana has just needed my full attention all day long.  The rest of our family has been wonderful to let her have that too!

Our day started early.  I woke at 6am to get ready and then woke her up at 6:30 so she could have some juice.  She really wasn't ready to get up and only drank a little bit.  I did want her to have that though as I knew it would be a long time before she would have something again.

I kept Eliana upstairs thinking that being away from the kitchen and any thoughts or smells or sights of food would be a good thing for her.  While I was down getting dinner ready, Rebecca hung out with Eliana - and painted her nails.  (Its a little hard to see as it is mostly clear with glitter.)  She was happy to show them off. 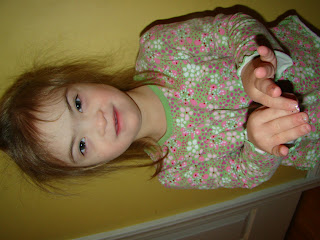 Shortly after 8am, we headed out.  I wanted to give us a little wiggle room in getting to the hospital by 8:45.  We arrived and found a parking spot close by and went to check in.  Check-in was very quick and then it was time to wait.  We saw people come and go.  Mostly we saw people wait.  And wait.  I was thankful we have an ipad.  It is wonderful for keeping Eliana entertained!!! 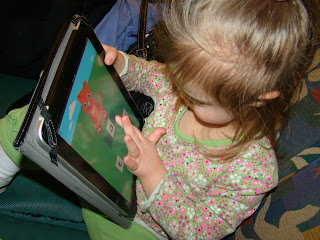 At about 10:20, we were called to go back.  We saw her doctor and talked with him a little while.  (Dr. Ulshen for any who are local and need a GI.  He has been wonderful!)  She was given a gown to wear - and she was not thrilled about wearing it!  She was also not excited about having her vitals taken.  Thankfully, she allowed bear to take a turn first today and then she would take hers.  (She is not attached to one specific animal which is why this has varied from one visit to the next.) 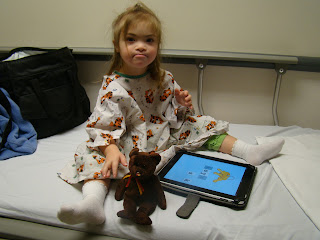 Still playing with the ipad, but also a new toy (to her) - my camera.  After I had pulled it out to take some pictures of Eliana, she wanted her turn.  And did she have fun!  She took a lot of pictures.  Many of bear. 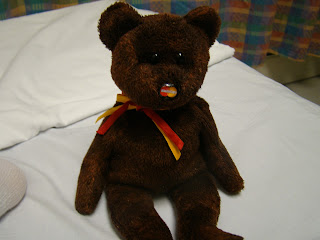 Some of the room. 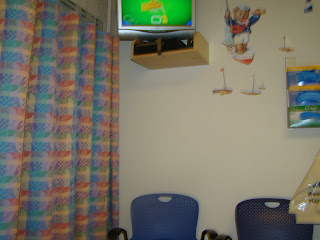 One of the anesthesiologists.  I talked with her about how Eliana was typically a hard stick and they took good care of her - and did not have trouble!  Thank you God for that answer to prayer! 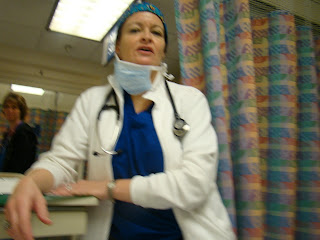 We had a kind and fun nurse who thoroughly enjoyed Eliana.  (on the right in the picture) 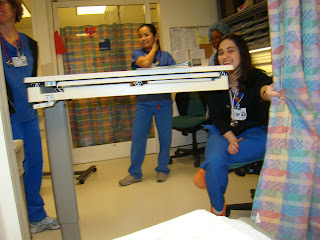 Many of her pictures are wobbly, but I'm sure she will learn with time.  It's moments like this that I LOVE having a digital camera!  No worries about wasted film.  Its fun to hear her laugh, direct people to look or smile and to just experience her joy.

She has a cheesy little smile that she gives when I ask for one for a photo.  Still really cute though! 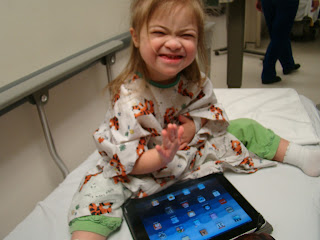 Soon it was time to go back.  Eliana was really unsure about a ride on the huge bed.  The doctor quickly suggested that I carry her and our things got a ride instead.  I am thankful for the many people who work in the medical field that are sensitive to the patient.  I am thankful for those willing to do things a better way instead of the "prescribed" way.

We decided to try just the anesthesia through the mask.  It was an option to try the oral first - but it is bitter tasting and adds one more drug to the system.  I held Eliana while they put the mask on her.  She cried and pleaded.  It is so hard to hold your child down when they just want you to rescue them.  Thankfully she was out very quickly. 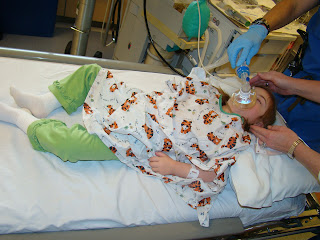 It was then time for me to leave and wait on my own.  Thankfully it wasn't too long before I was called to the consulting room.  I have to tell you that this made my heart sink.  I remember being told when she had heart surgery that being called to this room could mean that something had gone wrong and they would talk with you privately.

Thankfully, all had gone well.  Dr. Ulshen explained what he had done and had it all written out for me too!  There were even some pictures taken during the scope.  He said that everything looked normal.  (Don't get too excited yet!)  The biopsies will be sent out to be tested.  We should hear something within a week or so.  I'm hoping (kind of) for sooner.

The blood tests give reason for hope - her tTG numbers were only slightly elevated.  This makes me wonder if maybe it is just being caught early (which would also explain why we haven't seen a lot of symptoms).  It could be too that this means there is no celiac.  The other piece of the test EMa was positive.  This is the one that was the red flag.  He said this one rarely has a false positive.

If she tests positive for celiac, we'll have more appointments.  If she doesn't, this is probably something that she will just have to be screened for periodically.  Dr Ulshen was so very patient in explaining things to me and answering my questions.  Did I mention that I really liked him?

Out to wait a bit more and then I was called back.  I was stunned to see Eliana's eyes open when I walked in!  Still really groggy, but definitely waking up.  Isn't she tiny in that big bed? 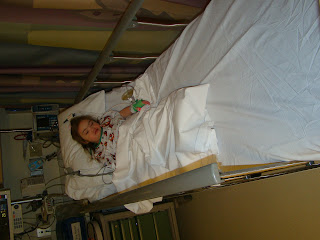 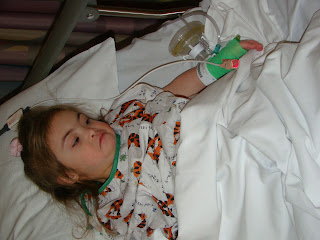 She fell asleep on the way home, but awakened when we arrived.  She then had a hard day.  She was fussy.  I fed her a little bit.  Started with jello, juice and water.  Moved on to applesauce and pudding later in the day.  I had been told she might have a sore throat.  She also was often just trembling in my arms.  I held her a lot of the day.

Finally took her up to nap and she slept in our bed beside me - very fitfully for several  hours.  She woke up hot and had a temp.  The first thermometer said 103.  I took it again with a different one and thankfully it was just 100.  Still trembling and fussy.    She still felt pretty crummy.

Ate a little bit and then I took her upstairs to watch a movie in bed.  She calmly watched it and I think felt a little better by then.  It didn't help that I then needed to remove the leads from the hospital.  Roger went out to get baby oil as I had been told that would help.  A little bit, but those things are really stuck on!!!  I don't know what type of adhesive they have on them, but it is strong!  She cried and cried while I was taking them off, even though I was being very gentle with her.  Being a parent is just not easy sometimes.

I gave her a quick bath to try to remove some of the oil and she again started trembling all over and crying.  It is hard seeing her so miserable.  It was bedtime by then.   I gave her a snack and then we brushed teeth and read some books.  Said prayers and gave hugs.  Time to go to sleep.  I love putting her to bed.  It is a sweet part of the day.

Today was a good day and also a hard day.  In it all, there is so much to be thankful for.  God answered so many prayers.  This has gotten long and is probably way more than anyone wanted to know.  LOL

Thank you for your prayers.  I will post the news when we get it.  Still hoping for the best, but trying to prepare my heart for the worst.

Blessings
Leslie
Posted by Leslie at 1:23 AM 8 comments: Links to this post