This was a co-op that had been in the planning for several months.  When reading ahead for the lessons in the book, I saw that there was a science fair.  This is not something that I had ever tackled before and I wondered if the others would be interested - and they were.  As part of our co-op lesson several months ago (either end of Jan or early Feb), I did my teaching on the scientific method and doing a science fair project.  We used the scientific method as a means of the steps of conducting an experiment.  The students did a fabulous job with their projects.  It was so much fun to see the different topics that they chose too!

We had one on eggs and comparing the space of the air cell in new versus old eggs.  The students shared their hypothesis and then how they conducted their experiment and their findings. 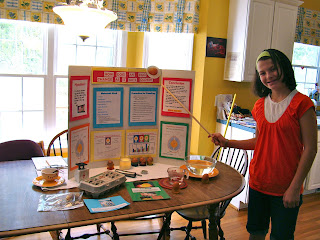 Some of them spent several months working on collecting data.  This one was looking at the types of birds that came to the feeder and measuring to see if time of day made a difference. 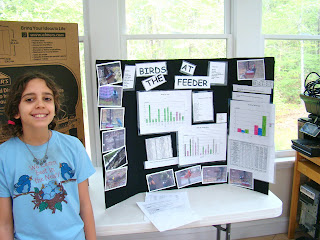 Isaiah did an experiment comparing a McDonalds happy meal (hamburger and fries) to a homemade burger and fries to see if there would be a difference in the way that they deteriorated.  He measured the results for two months to see what he could find.

The happy meal did not mold and the fries looked the same as the day that we bought them.  The homemade burger did grow mold after several days.  The fries also browned.  All of the items hardened and dried out. 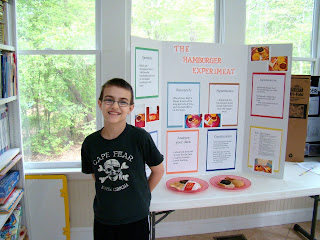 It was an interesting and kind of gross experiment.  Can I mention that I'm glad to have it off of my kitchen counter!  LOL 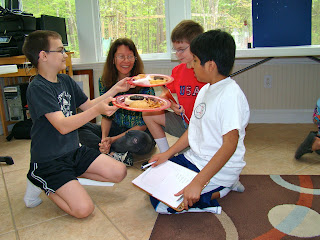 An experiment looking at how temperature of water and thickness of a liquid affected the diffusion of food coloring. 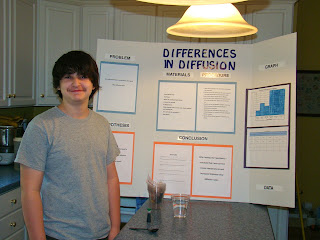 The demonstration with mixed colors was fun to see! 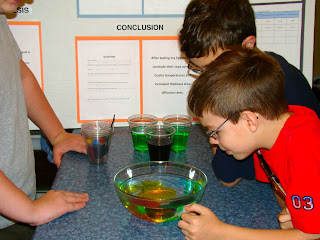 An experiment on rockets including both the history of rockets and sharing the results of their at home experiments with us. 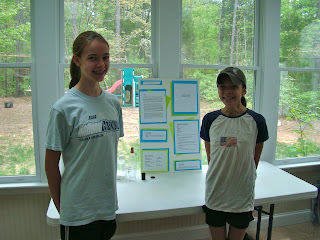 This project tested people to see if they could remember a list of words more easily if it was on a screen or a piece of paper.  The results were pretty conclusive too - not one person remembered the words better after having seen them on a screen! 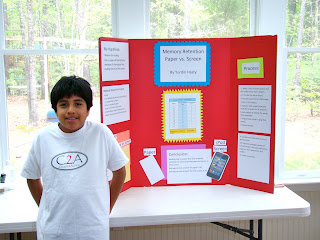 Daniel wanted to do a volcano.  He conducted many (23+) experiments varying the amounts of baking soda and vinegar to see which added the most explosive power.  He also made and built a volcano. 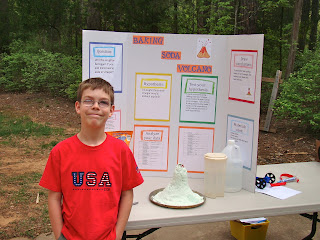 He found that adding more of both ingredients really worked the best.  And doing repeat experiments often worked better than the original 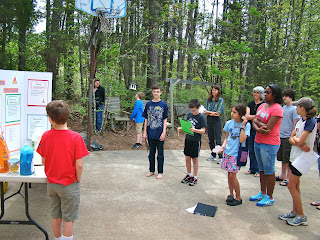 He was so excited to show off his experiment.  This is one of the early ones, but he also added red food coloring to make his lava more realistic. 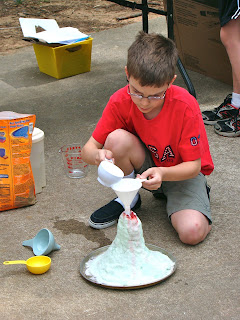 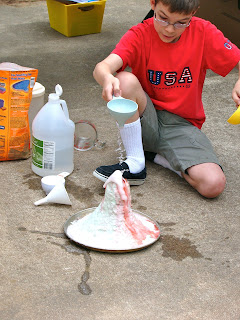 This is an experiment using mentos and soda.  A fun visual for everyone! 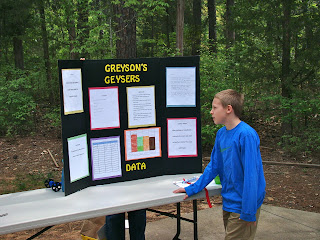 He found that diet sodas did not have the same explosive power as  regular sodas. 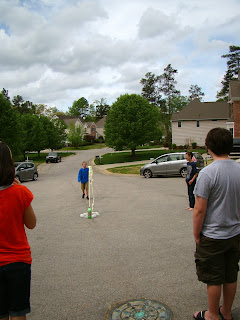 The last experiment tested the effects o wind on a paper airplane using a small fan.  A sudden burst of air from below caused the plane to go significantly less far in its flight path. 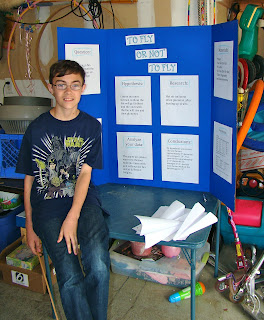 All of the students did such a great job.  Each made a display board and gave a short presentation.  They all explained their work well and it was fun hearing about what they had been doing! 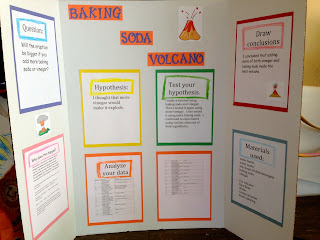 This was such a great morning!  I think we have more of these in our future.  It was a lot of work - but I think well worth it in the end.

One thing we also did was to have each student write positive comments on a card to be given to each of the other students.  I liked this feedback!  We also had them give "awards" to each other for things like most creative, best display, best presentation, etc.

I highly encourage you to try this out if you haven't yet.  It was a fabulous experience!

Blessings
Leslie
Posted by Leslie at 5:00 PM No comments: Links to this post